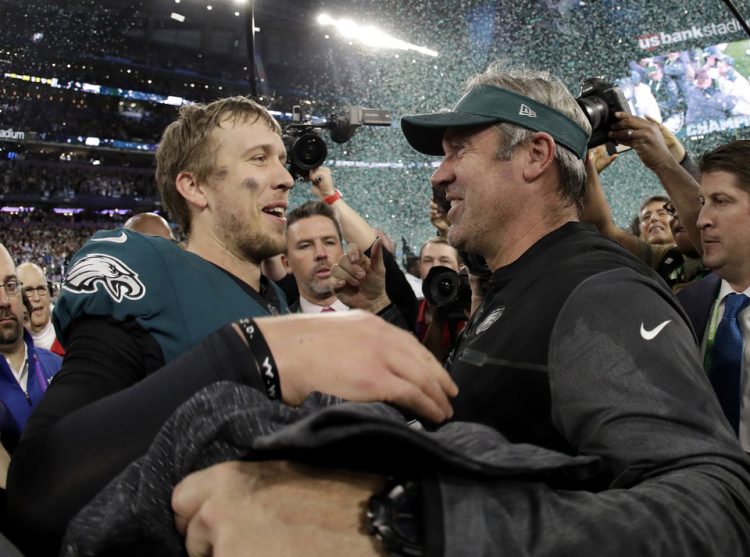 Here is how one Roman Catholic writer saw the faith of Eagles‘ players as a win for the good guys (meaning the faith tradition centered in Vatican City):

On Sunday night, the Philadelphia Eagles beat the New England Patriots to become Super Bowl winners for the first time in history. But as national news outlets reported the big win, only a few also highlighted the quarterback’s Christian faith and his dream of becoming a pastor.

And he’s not the only player who praises God. A majority of them credit Him as their inspiration, and publicly, on Twitter.

In his Twitter bio, Eagles quarterback Nick Foles lists himself as a “believer in Jesus Christ” and uses his account to share quotes from the Bible. He tweets messages like “with God all things are possible” and “Thank you God for another day.”

And while quarterback Carson Wentz stayed off the field due to injuries, he offered God thanks shortly before the game.

“God’s writing an unbelievable story and he’s getting all the glory!” he exclaimed. After the game he added, “God is so good!!!! World Champions!!!!”

Two days after the game, Wentz turned to God after another life-changing event: He proposed to his girlfriend.

“She said YES!” he announced. “God is doing some amazing things and I can’t thank him enough!”

Acknowledging God is nothing new for Wentz. He uses Twitter to cite the Bible, give God credit, and even post pictures of himself with teammates kneeling on the field — to pray.

“My life is lived for an Audience of One,” he likes to remind his followers.

On defense, Brandon Graham once posted a picture of the team in prayer. “Win, Lose, or Draw we make sure we give God all the glory because he is the reason we are able to go out each and everyday and play this game,” the left defensive end stressed in the caption.

No mentions of Mary, the church, sacraments, or the bishops. It could be that these players are Roman Catholic, but they don’t talk like it. In fact, lines like “God is great” or “God is good” could actually be Islamic.

Which raises the question of just how firm Roman Catholics’ resolve is in maintaining the differences between Luther and Francis. Of course, Francis has met and hugged Protestants during the 500th anniversary of the Reformation observances. And outlets like Commonweal, America, or National Catholic Reporter are hardly going to bang the gong for Tridentine Roman Catholicism. But lay writers like Katie Yoder working for Catholic Voter? Doesn’t she worry that, at the very least, these Eagles are going to spend a very, very long time in Purgatory without all the assistance of the church’s sacramental system?

But that worry would get in the way of the boosterism that regularly afflicts religious “journalism.”

Postscript: Is that a WWJD bracelet on Nick Foles?

16 thoughts on “Jumping on the Eagles’ Bandwagon”