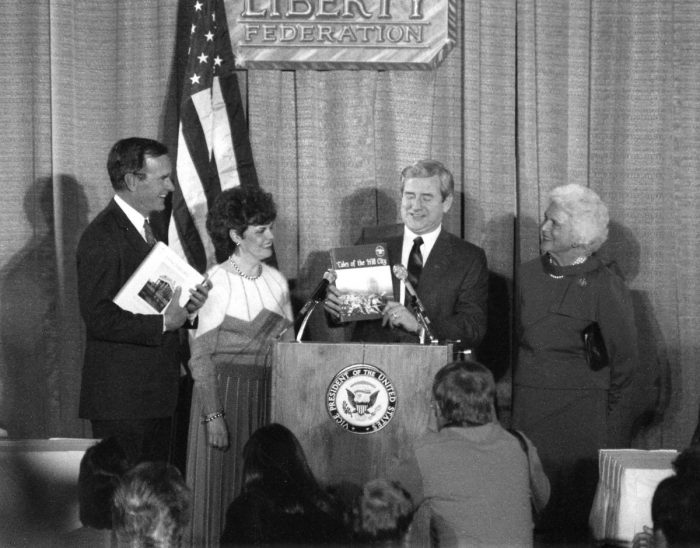 I never thought I’d agree with Harry Emerson Fosdick, but when he complained that fundamentalists were ignoring political problems for doctrinal purity he might have been describing evangelicals opposed to Trump:

Two weeks ago Great Britain, shocked and stirred by what is going on in Armenia, did as the Government of the United States to join her in investigating the atrocities and trying to help. Our government said that it was not any of our business at all. The present world situation smells to heaven! And now, in the presence of colossal problems, which must be solved in Christ’s name and for Christ’s sake, the Fundamentalists propose to drive out from the Christian churches all the consecrated souls who do not agree with their theory of inspiration. What immeasurable folly!

You could observe a few defects in contemporary American society. What has been happening in this nation for the last thirty years, at least, has not been good. Daniel McCarthy put it well in a recent Spectator piece about the significance of Trump’s presidency:

America has a problem, and it’s not Donald Trump. Suicides and deaths by overdose are up; life expectancy is down. The country that led its allies to definitive victory against both Nazi Germany and imperial Japan in just four years has now been fighting in Afghanistan for nearly 20, with no end to the Taliban in sight. Wall Street prospers but young Americans are deep in debt, manufacturing employment is in decline, and the Great Recession of a decade ago revealed how fragile and irrational the whole financial system is.

For all the talk we hear about ‘polarization’, the policies that led to these grim results were born of bipartisan consensus. Democrats and Republicans might bicker about abortion or guns, but for a quarter-century they were of one mind about free trade and foreign policy: Nato to Nafta and everything thereafter. They each made generous provision for financial and pharmaceutical interests. Enlightened opinion on university campuses and in the major media not only helped shape and amplify the consensus but marginalized practically all dissent from it.

Even today, the architects and propagandists of two and a half decades of policies that led to insecurity, despair and death are unrepentant. Worse, they demand more of the same: an end to Trump’s ‘trade war’ and more shooting wars in the Islamic world and beyond. Drugs and high finance are the future of the US economy, they insist, and manufacturing is better sent abroad.

You have to be a very idealistic democrat not to realize that elites drive society. The question is whether they drive it well or poorly — and with America’s elite, the answer is clear. But what force on earth can reform a corrupt or incompetent elite, one that serves itself and its dreams rather the citizens of the country? Or, perhaps more difficult still, what can compel it to reform itself?

In the midst of these developments, what do evangelical critics of Trump notice? They note incessantly the flaws in the president’s character and the hypocrisy of those who voted for him. According to Peter Wehner, there is no Christian case for Trump, which is true if you also can say there is no Christian case against Trump. The reason is that the president does not have to conform to Christian morality to hold office. Nor does the United States need to follow God’s law to be a legitimate government. But that is not Wehner’s point. His is the fundamentalist one that President Trump is morally suspect and that is the national problem:

The president put enormous pressure on a foreign power to intervene in an American election by harming his political adversary—and Grudem is completely untroubled by that. Can you imagine the outrage of Grudem and other Trump supporters if, in 2012, Barack Obama had coerced, say, China into announcing an investigation into and digging up dirt on Mitt Romney, and then justified it by saying that a president has the power to ask any nation to undertake any investigation?…

Again, the argument made in the editorial is not that Trump’s morally problematic actions in business and in his relationships with women are grounds for impeachment; it is that Trump’s moral transgressions are borderless and, therefore, his actions toward Ukraine are not surprising. And Grudem is simply wrong when he says Trump has not admitted to any immoral actions in business. Last year, a state judge ordered Trump to pay $2 million in damages after Trump admitted to misusing funds raised by the Donald J. Trump Foundation to (among other things) pay off business debts and purchase a portrait of himself for one of his hotels.

Even if you bend over backwards to give Trump the benefit of the doubt, you can’t watch videos or read lists of his lies and come away anything but troubled by how much violence Trump does to truth and reality. To dismiss Trump’s lies as simply manufactured by “fake news” is to perpetrate, even unknowingly, an untruth.

Another never-Trumper, John Fea, is fixated on Trump as a person (and seemingly indifferent to the conditions that made his electoral victory possible):

Here is where we differ Tony. You presuppose some kind of equivalency between Trump and all other politicians. This is why you are constantly saying “Well, what about Obama?” (And this is why I consistently reject this whataboutism). You believe that Trump and Obama (or any other recent president) are playing on the same moral field and thus must be evaluated in the same way. I do not. Trump has sacrificed the moral integrity necessary to deliver a speech like he did today. I agree with Jeff from Maryland when he says: ‘Trump could recite the Gettysburg Address’ and I would not believe him.

So Tony–at what point does a person lose all credibility in your mind? At what point does a person’s actions damage his or her attempts to deliver moral rhetoric to a public audience? I admit that different people will come to different conclusions about when a public figure has reached this level, but I find it hard to believe that it would not happen at some point. I have reached my point of no return with Trump. You, apparently, have not.

The point seems to be that Trump is beneath me. It calls to mind the Pharisee’s prayer, “God, I thank you that I am not like other men, extortioners, unjust, adulterers, or even like this tax collector. I fast twice a week; I give tithes of all that I get.” (Luke 18:11-12)

But this is all personal — both about the president and the critic. Beyond calculations of personal sanctity, many evangelical critics of Trump have no political or historical imagination to look beyond holiness to social conditions that need attention more than a president’s character.

Wehner and Fea are smart enough. But they are guilty of the narrow outlook that Fosdick saw in fundamentalists. As such, they could never conceive of Trump as Genghis Kahn the way McCarthy does:

Whatever else Trump has done, even his worst enemies will concede that he has injected back into the national conversation fundamental questions about economics, national cohesion and grand strategy that had been treated as closed for a generation. Voters who dissented from the grand consensus had no party and no voice in the media until Trump provided both. But since 2016 only a handful of others, such as Tucker Carlson, have reinforced him. The wealthy and well- educated have been forced to talk about Trump’s issues, yet they do so without admitting any culpability for the country’s plight. This state of denial might see them through the end of this administration but it won’t help them restore the public confidence they forfeited long before the barbarian reached their gates.

You may gain access to the Atlantic or Washington Post by banging on Trump and Jerry Falwell, Jr. But if your political theory is still based on calculations of personal and national holiness, then you have not advanced the ball very far beyond Jerry Falwell (the elder) or Pat Robertson.

Yes, that kind of evangelical.