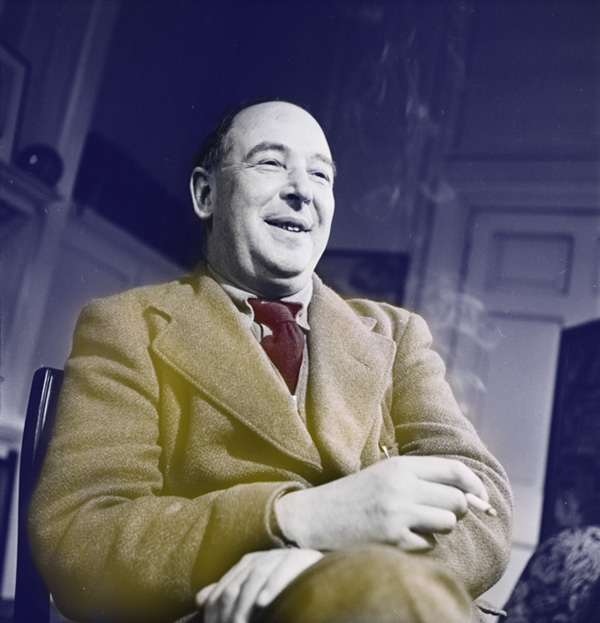 He would have gone to meet his maker a separated brother instead of a heretic thanks to the reclassification of Protestants by bishops consulting at Vatican II. Joseph Pearce remembers the coincidence of Lewis’ death and John F. Kennedy’s assassination, but forgets the simultaneous meeting of the council in Rome:

Lewis in his life was outside the Church but looking towards it and leading numerous others towards it also. He has played a significant part in the conversion of countless people to the Catholic Church, the present author and the aforementioned Peter Kreeft included. He not only believed in purgatory, he believed that he was going there. Shortly before his death, he asked his friend, Sister Penelope, to visit him in purgatory, if visits from heaven were allowed.

Is Lewis in purgatory? It is not for us to say, but surely it is inconceivable that one who loved Christ so much and led so many others to Christ and His Church could be in hell.

Is John F. Kennedy in purgatory? Again, it is not for us to say. It is true, however, that he was a cafeteria “Catholic,” like his latter-day “Catholic” counterparts Nancy Pelosi and Melinda Gates, who had turned away from the Church, preferring to serve the zeitgeist to the Heilige Geist, the spirit of the age to the Holy Spirit. There has to be a price to pay for those “Catholics” who have led so many others away from the Church in their open defiance of Rome and their scarcely concealed contempt for Her teaching. There is little doubt that Dante would have consigned JFK to hell. We should hesitate to do likewise.

Where are Lewis and John F. Kennedy now? Let’s just say that purgatory leads to heaven and that heresy and apostasy leads to hell.

Would Pearce have written it that way in 1963 before he learned that Protestants were separated brothers? And what of all the Christians that Lewis led into the church that Henry VIII liberated from the papacy?

But in an age of ecumenism, despite the insistence of Bryan and the Jasons, the idea of no salvation outside the church has vanished along with the Berlin Wall. Pearce is not alone:

Jack’s memories of religious instruction as a child were of attendances during his boarding school years at an Anglo-Catholic church. Although impressed by the dedication of the priests he disliked what appeared to be the copying of “Roman rituals”. Anti-Catholic slogans had sometimes been chalked on the walls of the family home during Jack’s early years in view of the fact that the cook and the housemaid employed by the family were Catholic. One read: “Send the dirty papists back to the Devil where they belong.” Jack’s nurse, Lizzie Endicott, taught him as a young child to stamp in puddles and “kill all the little popes”.

Jack was, of course, far too intelligent and perceptive to have allowed these early incidents to form his later opinions. Nevertheless, he is said to have been annoyed, in 1931, that a “papist” publisher had handled one of his books, The Pilgrim’s Regress. Of course, if Jack had converted to Catholicism, his marriage to Joy Davidman, a divorced woman, would have been unthinkable and it is unlikely that the huge literary output that she inspired in him would ever have been written.

It is perhaps understandable that with his dislike of Protestant fundamentalism, superstition and extremes of emotion, Jack chose to take a middle path, although his aim was always to help the cause of reunion or at least make it clear why we ought to be reunited. For him, the essence of Christianity was exemplified by Thomas à Kempis in his Imitation of Christ, with its emphasis on self discipline, humility and love. In following this, Jack was a true disciple and a strong ambassador for Christianity.

7 thoughts on “If C. S. Lewis Had Died Only Three Years Later”