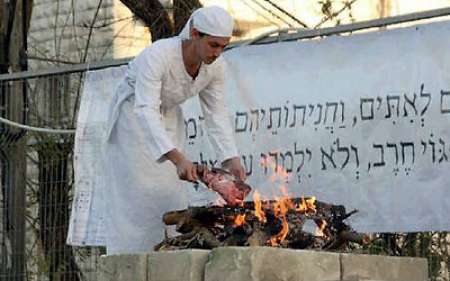 How to get around the Bible:

The priesthood in the Old Testament was a bloody business. On the eve of the Exodus, God commands the Israelites to slaughter lambs and paint the doorposts with blood in preparation for the Angel-of-Death Passover. The sacrificial rituals by Old Testament priests included the butchering of lambs and goats.

In the Book of Leviticus we see the priests slaughtering a goat for purposes of atonement and, after the laying of hands, the release or escape of a companion goat into the desert, carrying with him the sins of the people. This is where the word “scapegoat” came from. (In response to the Protestant denial of the sacrificial nature of the Mass, the Church inserted the “laying on of hands” gesture over the bread and wine before the Consecration to remind us that Christ is the sacrificial “scapegoat” of our sins.)

A significant teaching of the Book of Hebrews is that, in Christ, the old priesthood has come to an end. It is no longer necessary for priests to enter into the Temple again and again to offer their bloody sacrifices in atonement for the sins of the people. Why? Because Christ – the Lamb of God – suffered and died, once and for all, for our redemption and salvation. Thus there is no need for repetition of the bloody sacrifices of old.

But why then do we offer the Sacrifice of the Mass every day, throughout the world and throughout history? At first glance, it seems to be a violation of the teachings of the Book of Hebrews. But remember, the Mass is an unbloody sacrifice. Through the Mass we participate here and now in that single bloody sacrifice of Christ – and we also mystically participate in His glorious Resurrection. The key word is “participation” not “repetition.” We do not repeat the Sacrifice. We enter into the one Sacrifice during Mass. It is as if we reach into the heavens (Pope Benedict uses the term “celestial liturgy”) and find ourselves at the foot of the Cross in history – then, finally, encountering the risen Christ.

But what about transforming culture? The Mass does that too.

This is why the Mass as a ritual cult is so essential. We truly, mysteriously and mystically enter into the sacred events of our salvation. In Communion with Christ, we are transformed and sent forth into the world. And through us our culture is transformed because of our participation in the cult of the Mass.

Imagine simply following the apostles. No more sacramental meat. Assimilation to the Empire.

54 thoughts on “From Cult to Culture”