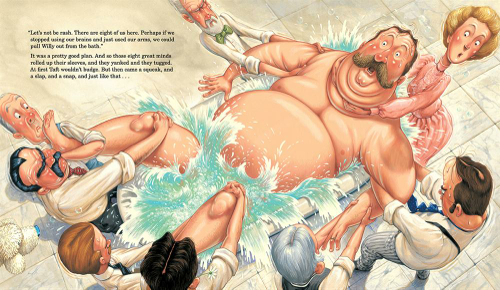 I heard this morning on Sports Talk radio of all things that on this day in history President William Taft, a man of gargantuan proportions, became stuck in his bath tub:

What most people associated with Taft, however, was his enormous size, and the image of his 300 plus pounds of presidential flesh offended some people and amused many others. When he became stuck in the presidential bath tub, requiring six men to pull him free, the nation’s press had a field day. His size made him the subject of countless jokes: “Taft was the most polite man in Washington. One day he gave up his seat on a streetcar to three women.” Within the capital’s social circle, Taft frequently embarrassed his family and associates by falling asleep at concerts, during presidential briefing sessions, and while presiding over his cabinet. At ease with his uncontrolled appetite and his need for sleep after eating or after exerting himself, Taft simply refused to be embarrassed by his weight or his behavior. He accepted his size and so did most of the American public in time.

What many Americans don’t know is that President Millard Filmore was the first to take a bath in the White House. Here is H. L. Mencken’s account:

But it was the example of President Millard Fillmore that, even more than the grudging medical approval, gave the bathtub recognition and respectability in the United States. While he was still Vice-President, in March, 1850, he visited Cincinnati on a stumping tour, and inspected the original Thompson tub. Thompson himself was now dead, but his bathroom was preserved by the gentlemen who had bought his house from the estate. Fillmore was entertained in this house and, according to Chamberlain, his biographer, took a bath in the tub. Experiencing no ill effects, he became an ardent advocate of the new invention, and on succeeding to the Presidency at Taylor’s death, July 9, 1850, he instructed his secretary of war, Gen. Charles M. Conrad, to invite tenders for the construction of a bathtub in the White House.

This action, for a moment, revived the old controversy, and its opponents made much of the fact that there was no bathtub at Mount Vernon, or at Monticello, and that all the Presidents and other magnificoes of the past had got along without any such monarchical luxuries. The elder Bennett, in the New York Herald, charged that Fillmore really aspired to buy and install in the White House a porphyry and alabaster bath that had been used by Louis Philippe at Versailles. But Conrad, disregarding all this clamor, duly called for bids, and the contract was presently awarded to Harper & Gillespie, a firm of Philadelphia engineers, who proposed to furnish a tub of thin cast iron, capable of floating the largest man.

This was installed early in 1851, and remained in service in the White House until the first Cleveland administration, when the present enameled tub was substituted. (“A Neglected Anniversary,” New York Evening Mail, 1917)

Whether presidents have been clean ever since is a separate question.