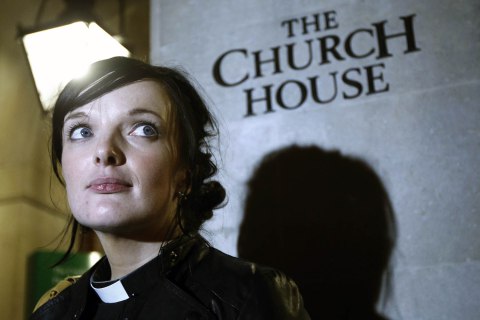 From our southern correspondent comes confirmation of an earlier prediction:

The committee should give particular attention to the issues of:

The biblical basis, theology, history, nature, and authority of ordination;

The biblical nature and function of the office of deacon;

Clarification on the ordination or commissioning of deacons/deaconesses;

The committee will have a budget of $15,000 that is funded by designated donations to the AC from churches and individuals (RAO 9-2).

A Pastoral Letter to be proposed by the ad interim study committee and approved by the General Assembly be sent to all churches, encouraging them to (1) promote the practice of women in ministry, (2) appoint women to serve alongside elders and deacons in the pastoral work of the church, and (3) hire women on church staff in appropriate ministries.

Grounds: The Cooperative Ministries Committee may not make recommendations directly to the General Assembly but must do so through an appropriate committee or agency (RAO 7-3 c; 7-6). The CMC has had a subcommittee on the role of women and has sent several recommendations to the AC (including a proposal for a study committee on the issue women serving in the church) and CDM to bring to the Assembly.

The former moderator of the PCA GA, Michael Ross, likely approves of this proposal:

The third reason is close to Ross’ heart, since it relates to the theme for this General Assembly, “Generations in Community.” A champion of church revitalization, he recognizes understandable tension and unrest within the PCA – as with most denominations – between older and younger generations.

“In biblical terms 40 years is a generation, and it’s normal to hear younger people saying, ‘This isn’t 1972 anymore,’” he explained. “As moderator, it’s important to have the ear of both the older and younger groups, so everybody has a voice and can be well-heard.”

Past General Assemblies have dealt with a variety of controversial issues, and although Ross does not expect “any landmines this year … there are always overtures that come up.” As for the PCA as a whole, Ross commented, “I tend to be optimistic about where we are and where we’re headed.”

When he entered the pastorate, the PCA was “either all-white suburbanites or in little towns. Now we’re coast-to-coast, much more ethnically diverse, and there is a strong PCA presence in large urban areas.

“Our seminary and college are doing well, as is the women’s ministry. The women and men in the PCA work together very well, which is not typical of many denominations. But we also are in a time of transition. It’s time for change, and change is always scary.”

But as I asked before, isn’t racism different from egalitarianism?

To be clear, racism is arguably different from excluding women from church office. Furthermore, the consequences of racism have been far more consequential than barring women from special ecclesiastical office (though I know some feminists disagree). But the question is whether the PCA’s condemnation of racism leaves wiggle room for distinguishing racial equality from equality of the sexes. (Have we all forgotten the CRC‘s arguments for ordaining women?)

In fact, the power of egalitarianism is so strong you have to wonder if the PCA will have the wits in a decade to avoid repenting not merely for tolerating financial inequality among its members but even advocating it. After all, once you start down the road of equality, doesn’t history suggest your brake fluid runs dry?