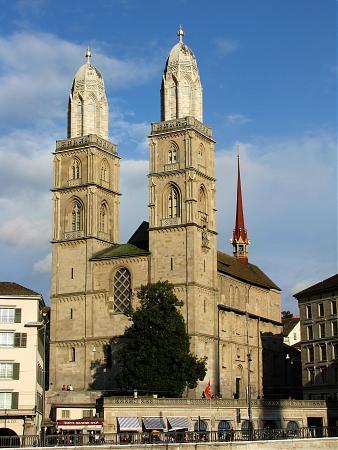 John Piper posted for the recent anniversary of John Calvin’s birthday about the origin of Calvinism. He went right to John Calvin and his conversion:

He was born in July 1509, in Noyon, France, and was educated at the best universities in law, theology, and classics. At the age of twenty-one, he was dramatically converted from tradition-centered medieval Catholicism to radical, biblical, evangelical faith in Christ and His Word.

Radical? At least it wasn’t earnest.

This is the sort of understanding of Reformed Protestantism that drives folks in Zurich nuts. At least a decade before John Calvin arrived in Geneva, Ulrich Zwingli was already reforming the churches of Zurich. Calvin was only twelve when Zwingli started on his way to Protestantism.

Nor should Martin Bucer be forgotten. He initiated reforms in the city of Strasbourg a year or so after Zwingli’s activities. Bucer also put his stamp indelibly on Calvin when in 1538 Geneva’s city authorities told Calvin to leave. Calvin ministered in Strasbourg for two years to a French speaking congregation and taught at Strasbourg’s academy, an institution that was a model for the Geneva Academy.

The point is that Reformed Protestants acknowledge the importance of Calvin but don’t put all their hero-worship eggs in one basket.

Piper to his credit quotes Benjamin Warfield who wrote:

The Calvinist is the [person] who sees God behind all phenomena, and in all that occurs recognizes the hand of God…

Is it too much to ask the New Calvinists to see the hand of God in the old Calvinism that emerged in places like Zurich and Strasbourg well before John Calvin was even a Protestant?