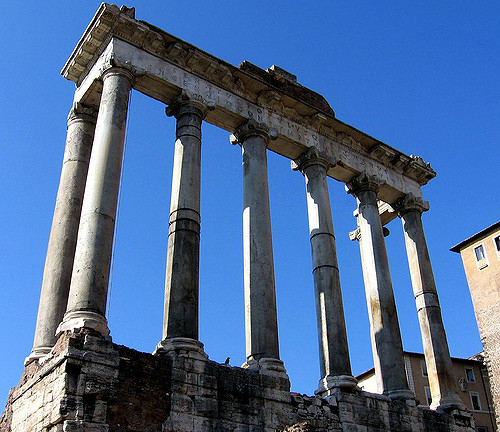 Thanks to his typing skills, Mark Van Der Molen reproduces a remark that Alan Strange made in his discussion at Reformed Forum on the spirituality of the church:

The separation of church and state, the distinction of church and state is something entirely different from the separation of faith from politics, or even God from State. None of those men believed in the separation of God from State. Even in public ways, all of them believed….basically Thornwell argued and so did Robinson, that it is immoral. Any state that is atheistic is immoral. They both argued that. If you read Robinson and Thornwell, and particularly Hodge, I think you will see they have clear points of integration. They have them in any number of ways, they all believed that it was immoral and unthinkable that the State would deny God or Christ in a general way.

(Alan, if you’re reading, I’m not picking on you. I am using your remarks to clarify, in which case disagreement may be beneficial.)

First, I do wonder about the difference between an atheistic and an idolatrous state. If the false gods are no gods, isn’t then every state without the Triune God revealed in Holy Writ an atheistic state. Is Turkey any better than the Soviet Union if the former acknowledges Allah in some way but the Soviets denied God? What about a Jewish state like Israel? Or how about a Mormon state like Utah? If states become immoral by virtue of atheism, aren’t they also immoral by denying the true God?

That puts Alan and Van Der Molen, perhaps, closer to the Puritans and a confessional state than to Robinson and Hodge who seemingly welcomed a secular government like the United States but rejected an atheistic state.

But keep in mind the progression of states that include God in their operations:

Puritans — they admitted only Puritans and excluded Baptists, Quakers, and Lutherans (for starters)

1820s U.S. — was friendly primarily to Protestants though all faiths could worship, which was a decisive break from 1640 Boston and 1550 Geneva

1950s U.S. — American society recognized a tri-faith monotheism informally of Protestants, Roman Catholics, Jews while also putting God on coins and in the Pledge of Allegiance, which was a break from 1820s Protestant dominated America

2010s U.S. — American society apparently has no religious standards and may even give sectarian faiths a hard time, which is a break from 1950s tri-faith America

The trend here is toward greater diversity and toleration. 2kers are trying to stop the bleeding by reconfiguring what God requires. The 2k conclusion, tentatively, is that God does not reveal a definite pattern for politics. The church is one thing, the state another. 2kers also try to learn lessons from the past and how earlier efforts to establish religious standards could not compete with the movement of peoples or the growing authority of the nation-state to regulate its citizens affairs in a way that achieved a measure of social unity.

What critics of 2k need to do is stop showing how 2k departs from the past. We get that. What critics need to do is not foment fear for disagreeing with Calvin or Winthrop — as if Protestants have post-canonical authorities whom we must follow. Critics need to propose an equation for God-and-state that is either required by God’s word (especially the part where Paul recommends submission to Nero) or that does justice to the lives that Christians now lead and somewhat enjoy.

2k is not novel in one sense. It advocates the spirituality of the church which is a part of the Western Christian tradition going back to Augustine, Paul, and Jesus. In another sense it is new — in the novos ordo seclorum way. 2k proposes a re-consideration of political theology in the light of modern social arrangements that is still true to Scripture and Reformed theology.

Is that any more scary than suggesting that the United States ban idolatry?