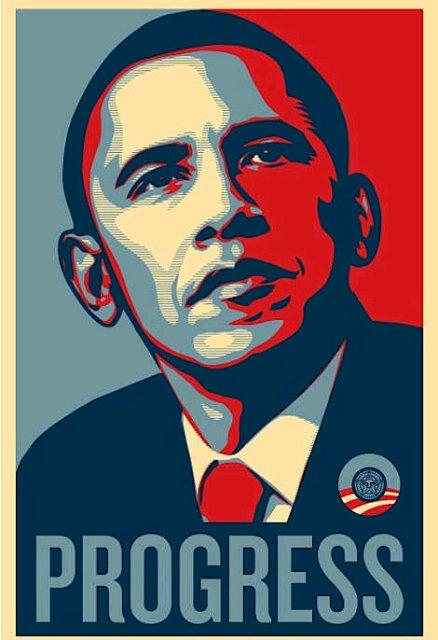 Citizens of the U.S. have become used to presidents talking about “the right side of history”:

Most recently, during his December 6 Oval Office address on terrorism, Obama said: “My fellow Americans, I am confident we will succeed in this mission because we are on the right side of history.” It’s a phrase Obama loves: He’s used it 15 times, in debates; at synagogues; in weekly radio addresses; at fundraisers. Obama is almost as fond of its converse, “the wrong side of history,” which he has used 13 times; staffers and press secretaries have invoked it a further 16. (These figures are all based on the archives of the American Presidency Project at the University of California Santa Barbara.)

But the expressions are hardly original to Obama. Bill Clinton referred to “the right side of history” 21 times over his time in office, while his staffers added another 15. Clinton also mentioned the “wrong side of history” several times. Ronald Reagan, for his part, wryly resurrected Leon Trotsky’s relegation of the Mensheviks to the “dustbin” or “ash heap of history.” Speaking to the British Parliament in 1982, the Gipper said, “The march of freedom and democracy which will leave Marxism-Leninism on the ash-heap of history as it has left other tyrannies which stifle the freedom and muzzle the self-expression of the people.”

That kind of naivete from the smartest people in the country (minus Reagan, of course) makes you (okay mmmmeeeeEEEEE) wonder what it feels like to lose and be on the wrong side of history (now Democrats know how Jerry Falwell felt in 1993).

But this is not simply an American problem. Paul Helm (not licensed as a historian) points out that history is not so readily categorized as right or wrong. But it is the legacy of the Enlightenment and a departure from Augustinianism:

This idea of history having a ‘side’, which is liberal, enlightened and so on, harks back to the enlightenment of the 18th century, to the emergence of what David Hume called ‘these enlightened ages’, in sharp contrast to the side of the ‘dark ages’ of medievalism. The idea is that such a surge as the Enlightenment, having begun, is inevitable, tending unstoppably in one direction. This side of history is on the move to better times, and so if we wish these times for ourselves and others, we had better get on the right side. And that direction becomes ‘obvious’ to those with enlightened minds.

The forces of darkness, of barbarism and superstition, are history’s other side, its faltering side, the side of those intent on ‘turning the clock back’, impeding or interrupting and so delaying its progress. Sooner or later history’s other side is to be decisively supplanted by the enlightened. So that dark side is destined to fail. The light side of history will succeed. Who wants to be left behind? So do not get left behind, for the Light and its forces will ultimately triumph over Darkness, reason against unreason, liberty against slavery, and so on. This is somehow connected with what Herbert Butterfield and others referred to as the Whig interpretation of history. Though this seems to have been, insofar as it existed, a gentler version of the current ‘sides of history’ view, at least insofar as it is view of history that is the outcome of ongoing parliamentary debate. In fact it may be said that so long as freedom of speech and the working of government and opposition in Parliament continues, the enlightened ages continue.

One implication is a lesson for those who think progressively about Christianity making the world a better place (read transformationalism). Don’t mimic Enlightenment progressivism:

Also linked with the winning side of history view is the idea of Western leadership and hegemony, which causes the rising sun to shine on the Sunny Side until the entire world basks in it. These are the engines of light. Currently these are the forces of globalism, international corporatism, and the waging of the war against global warming. Its personal ‘values’ include unlimited tolerance, and the freedom from offendedness of various kinds, along with the renouncing of the vestiges of nationalism and popularism, two currently-favoured examples.. Though it is said that we are living in a post-Enlightenment period, the confidence of the Enlightenment persists. Whatever ‘post-modernism’ is, it is not pessimistic.

The solution? Thinking like aliens and strangers, not conquerors and transformers:

It is a feature of living ‘between the times’ that God’s activity in history, his macro activity we might call it – cannot be correlated with the ebb and flow of history. Why is this? Because there is now no fixity between the events in history and the saving purposes of God. The only possible exception is the history of the church. But that is also rather uncertain. During the eras if special revelation – in the call of Abraham, and the history of Israel, and of course in the coming into flesh of the eternal Son, there is redemptive history in something like the usual sense of history. There were times in which the purposes of God with those with eyes to see, could be discerned. Through the ebbing and flowing, a trajectory of the divine redemptive purpose is discernible. But no longer. There is no ‘open vision’. Attempts to make a connection between historical states as the centuries roll, and the redemptive purposes of God are doomed. . . .

Such an understanding of history and the place of the Christian church in it throws into sharp relief the New Testament teaching on Christians as pilgrims and strangers, whose citizenship lies exclusively in a future city whose maker and builder is God. Any ‘Christian’ activity which seeks to impact dimensions of this present age and its cities –through social policies, political agendas, or arts and crafts – as so many expressions of Christian faith, inevitably compromises the root importance of a pilgrimage of men and women who otherwise may agree on little else, but whose eyes and hopes are in the New Jerusalsem. Besides these, the questions of history, its various sides and significances, matter not.

Helm should add, this outlook is not inspiring. No conferences on “Embrace the Suck” or “Endure the Uncertainty.”