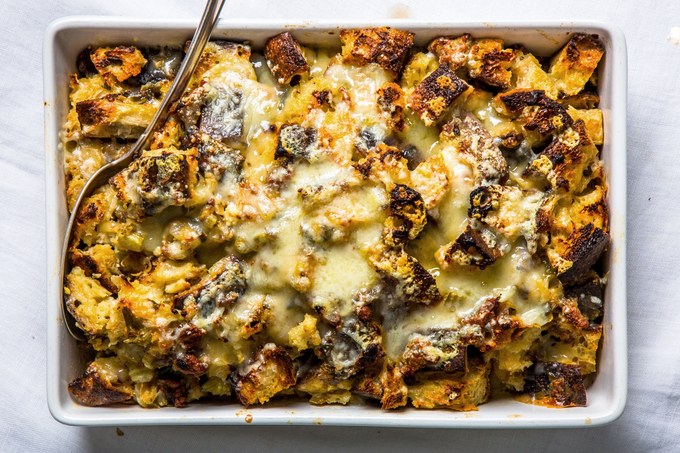 Martin Luther’s reform began with posting a message — how logocentric. Reformed Protestantism began with eating food. To reinforce Protestant identity while so many manque Protestants are finding their inner penitential selves, here are a couple recipes.

The first is for St. Galler bratwurst:

For those who think that looks hard (I do — who measures like that?), here’s a way to dine on sausage that looks tasty and comforting:

Preparation
Preheat oven to 300°. Butter a shallow 13×9″ baking dish and a large piece of foil. Place 9 cups bread in a large bowl.
Heat oil in a large skillet over medium-high. Cook sausage, stirring occasionally and breaking into small pieces with a wooden spoon, until browned and cooked through, 7–10 minutes. Transfer to bowl with bread.
Place onions, celery, sage, and 2 Tbsp. butter in same skillet; season with salt and pepper. Cook, stirring often, until onions are golden brown and soft, 10–12 minutes. Add wine and cook, stirring occasionally, until almost completely evaporated, about 5 minutes; scrape into bowl with bread and sausage.
Whisk eggs and broth in a medium bowl until smooth, then pour over bread mixture. Pour in half-and-half and add 3 cups cheese; toss to combine. Season with salt and pepper. Transfer to prepared baking dish and cover with foil, buttered side down. Bake until a paring knife inserted into the center comes out hot, 40–50 minutes .
Heat broiler. Uncover stuffing and top with remaining cheese. Broil until top is golden and bubbling, about 4 minutes. Let sit at least 10 minutes and up to 30 before serving.
Do Ahead: Stuffing can be assembled 1 day ahead; cover with foil and chill. Stuffing can be baked (but not broiled) 3 hours ahead. Store tightly wrapped at room temperature until ready to broil.

17 thoughts on “Time for Sausage”