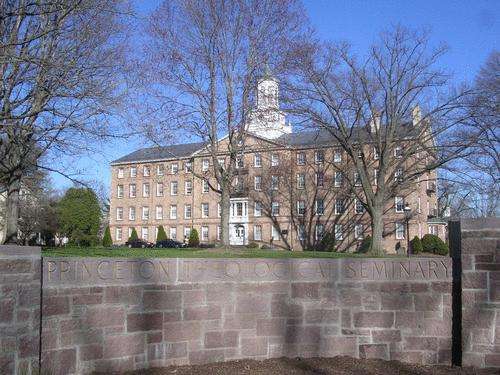 Owen Strachan is at a loss to explain why Princeton Seminary has decided to withdraw the Kuyper Prize from Tim Keller:

How odd that this fracas has happened at Princeton. Princeton Seminary is the ancestral home of Charles Hodge, B. B. Warfield, J. Gresham Machen. For a good long while, Princeton was one of the staunchest defenders of orthodoxy in all its gleaming brilliance, turning out thousands of Bible-loving, gospel-preaching pastors in days past. Princeton has long had ties to Abraham Kuyper, who delivered his famous “every square inch” Stone Lectures at the school in 1898. The Princeton-Kuyper-evangelical connection is alive and thriving at schools like Westminster Seminary, which produced sterling graduates like Harold John Ockenga.

Beyond thriving Westminster, as just one humble example, I will be teaching a July PhD seminar with my colleague John Mark Yeats at Midwestern Seminary on “Biblical Theology and Culture.” We will be discussing Kuyper’s Lectures on Calvinism. Baptists like me are thankful for our brother Abraham and his insights. Over 115 years later, the Kuyperian tree yet blooms, and on numerous campuses, the “Princeton Theology” yet lives.

But mark the irony: today, Kuyper could not receive his own award, as Michael Guyer noted. Nor could Hodge or Warfield or Machen—strong complementarians all—win such an honor, or perhaps even teach at the school they did so much to establish and strengthen.

Does Strachan not see the irony that Machen had to leave Princeton for Old Princeton’s theology to thrive? Doesn’t he understand the irony of the anti-Machen Princeton awarding (the pro-Machen?) Keller with a prize associated with the Calvinist orthodoxy of Abraham Kuyper?

Strachan interprets this episode as another indication of how deep the antithesis goes:

Don’t be confused: this world hates the gospel, hates God, and hates Christ (Romans 8:7). It calls faithful men and women of God to sit down and fall silent. But, in love for fellow sinners, we graciously refuse to do so. We will preach the whole counsel of God, including biblical sexual ethics, which glisten with divine craftmanship. We will rise to praise Tim Keller, a man who received a weighty charge from God, a man entrusted with much, a man who did not drop the baton.

That’s pretty arch for a defender of Keller since that world-hating-Christ meme has never been prominent in Keller’s we-can-redeeem-this approach to the big apple.

But if the world is all that, why would Keller recommend Gotham the way he does? And if the world hates Christ as Strachan says, why would Tim Keller not look at Princeton’s effort to award him as an indication that he may not have been as clear in his communication of Reformed orthodoxy? After all, when E. J. Young received an invitation merely to serve on Christianity Today‘s editorial board, he refused to identity institutionally with the church for whom Princeton Seminary is the theological flagship:

As you well know, Carl [Henry], there was in the Presbyterian Church a great controversy over modernism. That controversy was carried on by Dr. Machen in part. There were many who supported Dr. Machen in his opposition to unbelief. On the other hand there were many who did not support him. When matters came to a showdown and Dr. Machen was put from the church there were those who decided it would be better to remain within and to fight from within. . . . Since that time I have watched eagerly to see what would be done by those who remained in the church. They have done absolutely nothing. Not one voice has been raised so far as I know to get the church to acknowledge its error in 1936 and to invite back into its fold those who felt constrained to leave, or those who were put out of the church. . . . What has greatly troubled me has been the complete silence of the ministers in the church. They simply have not lived up to their ordination vows.

If Keller had been holding out for confessional Presbyterianism, Princeton never would have paid him attention. And if Princeton Seminary had ever checked Keller’s curriculum vitae, they’d have seen Westminster Seminary, the school founded by Machen, and wondered, “what were we thinking?”

If only the New Calvinists paid a little more attention to Old Calvinists, they might know that Calvinism is never sexy. As Mencken said for many mainstream media members, “Calvinism is but little removed in the cabinet of horrors from Cannibalism.” But instead, New Calvinists listened to Keller and thought, if he can make it in New York City, so can we.

26 thoughts on “Why Would Tim Keller Accept Princeton’s Invitation?”