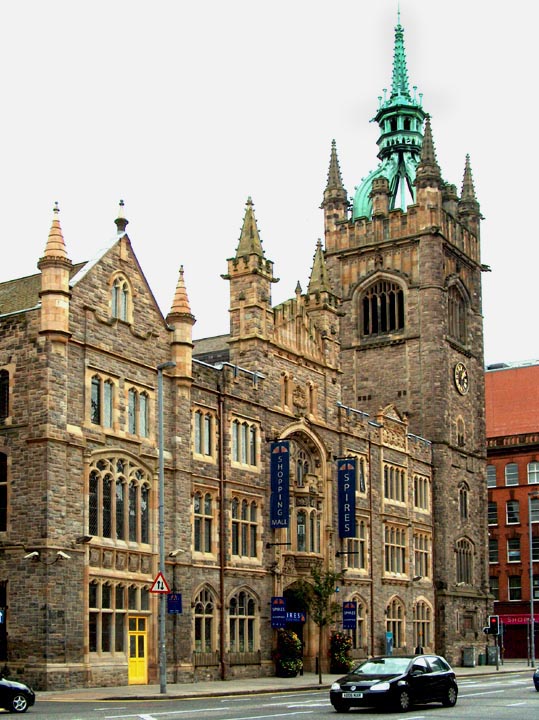 Old Life took a wee vacation last week thanks to (all about) my trip to Belfast which included delightful discussions with a historian who must remain anonymous for the sake of his good name and sightseeing with an old (not as old as mmmmeeeeeeEEE) friend who also deserves protection from tawdry associations with this blog.

I had the privilege of speaking informally with folks from the Presbyterian Church in Ireland and the Evangelical Presbyterian Church. Those communions are not in fellowship thanks to the split in 1927 over liberalism in the PCI, a debate that has all the earmarks of the so-called fundamentalist controversy in the U.S. In fact, W. J. Grier, who studied at Princeton Seminary with J. Gresham Machen, took some inspiration from conservatives in the U.S. to oppose the teaching of J. E. Davey, who taught church history and theology at Union College (in effect the seminary for Irish Presbyterians). When the trial against Davey failed, Grier led the formation of a new Presbyterian communion.

That parallel suggests that PCI is to the EPC what the PCUSA is to the OPC. But such reading of American dynamics into Ireland misses how different American Presbyterianism is. If anything, the U.S. equivalent to the PCI is the Evangelical Presbyterian Church (the American one that had Tim Keller speak at its GA). The PCI is more evangelical than the PCUSA and does not go out of its way to be inclusive. Whether it will ever go out of its way to discipline erroneous views is another matter.

Another difference is that the PCI’s moderator is tenth in the Orders of Precedence in the United Kingdom.

I have no idea how to reconcile the Wikipedia chart with the church’s website about political status in Northern Ireland. But I do suspect the matter has something to do with the Regium Donum, a “royal gift” from Charles II to dissenting Protestants (outside the Church of Ireland — Anglican) to support their ministry. In fact, the royal recognition of the PCI’s moderator means that he receives invitations to affairs in London held by the British government. I suspect it also means some sort of royal representative at PCI General Assemblies the way that the Queen still sends a delegate to the Free Church of Scotland.

But we American Presbyterians compensate with celebrity.

Which raises the question whether a brand like Tim Keller has more influence in national (or urban) life than a royal gift. I am asking because inquiring minds want to know.

13 thoughts on “Which Matters More, Branding or Order of Precedence?”