I was in the nation’s original capital yesterday and saw this at 22nd and Walnut: 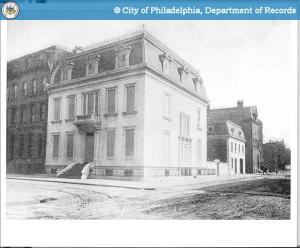 Which makes me think this has a point:

Meanwhile, in Philadelphia, a generous tax abatement program—combined with flawed preservation policies—changed the landscape of Center City and its surrounding neighborhoods. During the past decade, the city experienced a demolition bonanza. In neighborhoods of historic housing like Powelton Village, developers “have discovered they can make a tidy sum simply by replacing one of these old houses with a stucco-clad apartment building and then cramming it with students,” observed the Philadelphia Inquirer’s architecture critic, Inga Saffron.

Preservationists have protested how Philadelphia’s demolition permits are approved. In the past year, two historic structures were razed for projects that never materialized. Currently, the preservation fight is focused on Center City’s Jeweler’s Row, a charming set of commercial properties on a block laid out in 1799. The historic storefronts, slated for demolition, would be replaced by a massive condo tower. Ill-advised demolition projects continue throughout Philadelphia, its future depending on an influx, however temporary, of millennials and students.

Why does it take regulative-principle toting confessional Presbyterians, not urban hipster pastors, to notice?

4 thoughts on “When Did Philadelphia Turn into San Diego?”