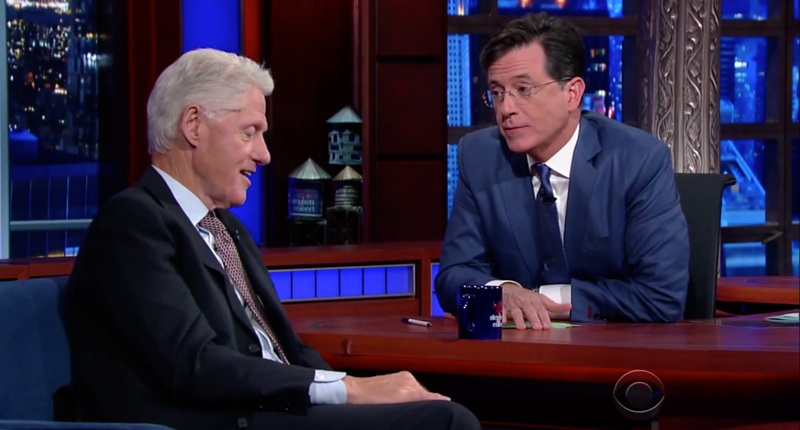 I imagine that was Peter Sagal’s defense for this bit of Wait, Wait, Don’t Tell Me (an episode I heard while driving in New England):

SAGAL: Tom, this week, listeners also wrote in, saying we were way too mean to Mitch McConnell. What was the specific insult our listeners were upset by? Was it A, Mitch McConnell looks like a thumb with glasses…

SAGAL: …B, Mitch McConnell looks like a Mr. Potato Head if the potato had been mashed…

SAGAL: …Or C, as a young man, Mitch McConnell didn’t beat polio. It was that polio left his body because it couldn’t stand being there any more?

BODETT: Oh, you know, I think he did have polio as a child. Is it that one?

SAGAL: No, it was actually a trick question…

SAGAL: …Because it wasn’t any of those.

BURBANK: I feel like we wouldn’t be on the radio this week…

BODETT: I was going to say, you know?

BURBANK: …If it was any of those.

SAGAL: We said Mitch McConnell looks like a chinless owl.

SAGAL: To our credit, we also didn’t say…

SAGAL: No, we didn’t say these, so people had no reason to complain. We didn’t say Mitch McConnell looks like a jack-o’-lantern that was left out on the porch till March.

SAGAL: We certainly didn’t say that Mitch McConnell looks like someone dropped a bunch of facial features into a bowl of butterscotch pudding.

SAGAL: We absolutely did not say…

SAGAL: …That – you know when somebody pulls out their belly skin to show you how much weight they lost? – that looks like Mitch McConnell’s face.

SAGAL: And we certainly never stooped to saying that Mitch McConnell’s face was bleeding badly from a face-lift.

SAGAL: We would never do that.

SAGAL: Too low even for us.

I am sure Senator McConnell chuckled right along with NPR’s quiz show host, panelists, and audience.

And to keep it fair and balanced, here is how Sagal yucked it up with Nancy Pelosi when she was Speaker of the House:

SAGAL: It sounds good, though, Nancy. So we’re delighted to have you with us. We found out, and it should be obvious, given your success in politics, that you grew up in a very political family. You were raised in the business.

SAGAL: Your father was the mayor of Baltimore.

PELOSI: Yes, he was.

SAGAL: Right. So what was it like growing up in a political household?

PELOSI: Well, it was like campaigning, forever campaigns, all the time. There was never a time when we weren’t walking precincts or receiving volunteers at the door to pick up their brochures, their buttons, their bumper stickers, their placards that would be called lawn signs these days. And I learned how to count votes.

SAGAL: Did you really? So, like, other kids were counting blocks, you were like going “one vote, two votes.”

SAGAL: When you were a baby, were you kissing babies?

SAGAL: We were reading about your father’s career and your involvement with him, and we read that one of the jobs that you had working with your father was that you kept his favor file. Is that correct?

SAGAL: What is it exactly?

PELOSI: What it is, is that if somebody – for example, if someone came to the door and said they needed help in some way, if they needed help finding a job or something like that. The idea was, of the favor file was that when that person was on his or her feet then they would extend a helping hand to somebody else. In other words, they passed it on.

PELOSI: So where would you go to look for help for somebody else is someone that you had helped already.

SAGAL: Right. Or if you needed to have someone killed…

PELOSI: Again, it was a very…

SAGAL: …call upon this person.

PELOSI: Do I detect an ethnic slur there?

SAGAL: I wasn’t at all thinking about that scene from “The Godfather.” I really wasn’t.

CHARLIE PIERCE: Leader Pelosi, we have no idea who this guy is doing the interview.

SAGAL: So, eventually you got married, you moved with your husband to San Francisco and you got involved with politics there. You ran for office yourself. You know, when you went into politics, you did it with a splash.

Of course, you rose through the ranks of the Democratic Party in the House, and you became the Speaker of the House. You’re our first Speaker of the House we’ve ever had on the show. We have a lot of questions about that. Primarily, what is it like to sit behind the president during the State of the Union address?

SAGAL: Is it hard to maintain a straight face?

PELOSI: Well, I’m glad you’re getting down to the truly important here…

PELOSI: …Speaker of the House.

SAGAL: No, really, I mean it must – because you know, like the nation is looking at the president and you are looming there over his shoulder. You could wreak havoc with the address if you wanted to, by making faces. Do you have to think about, like…

PELOSI: Well, one could.

SAGAL: That is power. You could keep him waiting. You could be standing, and he could be waiting outside. And you could be like, “So guys, what’s up?”

SAGAL: I want to ask a little bit about the job. Do you ever talk to the current Speaker, John Boehner? Does he ever call you up and go “I don’t know how I’m going to get this done; these guys are being so obstreperous. What do I do, Nancy?” Does that ever happen?

SAGAL: He doesn’t invite you over, back to your old office just for a get together, have a good cry, you and him and talk about problems.

FAITH SALIE: Nancy, I can’t believe I just called you that. Thank you.

PELOSI: Thank you, Faith. I’ll call you Faith; you call me Nancy.

SALIE: That’s a deal. I earnestly want to ask you about an issue that’s dear to my heart and I understand it’s dear to yours, which is chocolate.

SAGAL: We’ve read this too that this is your great vice, if you will, you’re big into chocolate.

SALIE: A blessing from God.

SAGAL: You consider it…

BURBANK: Let’s get down to brass tacks. How many pounds of chocolate have you eaten today?

You tell me, which is funnier? Peter Sagal laughing his way through the week’s news or Man Getting Hit by Football?

3 thoughts on “We’re Laughing With not At You”