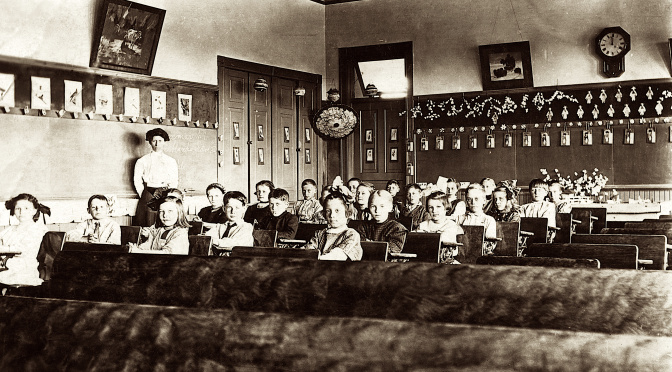 And we think contemporary public schools suffer. They had challenges even before Richard Nixon:

The super-science of pedagogy, that fairest flower of the New Thought, has achieved its greatest triumphs in the reclamation of the erring, or, as the old-time schoolmasters had it, the bad. Those old-time schoolmasters knew nothing about scientific pedagogy. They were not experts. When, for example, a boy hooked school they had no remedy for his error save the application of the birch to his pantaloons, and this barbarous remedy they kept on applying, in more and more heroic doses, until he abandoned the practice or graduated into long trousers and a political job. Such was pedagogy in its Gothic days, before it began to mellow and expand. Such were the dark ages before psychotherapy and raffia work.

Today, as everyone knows, the birch is under the ban of all recognized experts, and the inhuman teacher who resurrects it and applies it is promptly burned at the stake. In its place we have the “correctional” or “parental” school, in which original sin is combatted with moral suasion, and the erring are seduced to diligence by the subtle arts of the Chautauqua psychologist. New York city now has such a school “on the cottage plan,” and the hunkerous New York Sun presents an illuminating report thereon. Each of the six cottages, it appears, houses 32 pupils–and each cottage cost the taxpayers $81,500 to build! The cost of maintenance is $5.50 a pupil a week, the which, added to a reasonable interest on the investment, works out to between $8 and $9 net!

7 thoughts on “More of Those (were the) Days”