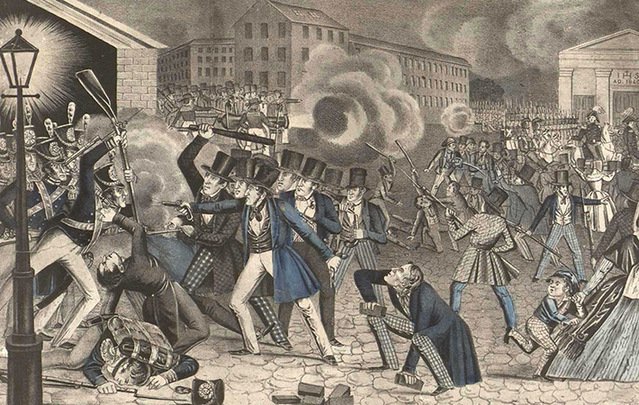 Missionaries tell us no. Convincing indigenous peoples that they don’t need to become western or American in order to trust Christ has been a chief insight of modern missions at least since 1900. But for some of the younger Calvinistically inclined folks, the push back against liberalism also now includes a defense of cultural Christianity.

Picking your spots for such a faith surely requires discretion since the riots in Philadelphia between nativist Protestants and Irish Roman Catholics had all the earmarks of cultural Christianity. Protestants expected the public schools to use the Bible to reinforce republican norms but Roman Catholics objected that the Protestant Bible was not neutral — it was not even the right one — the Douay version. Those riots were far more about politics and culture, but defenses of cultural Christianity tread gingerly around such episodes.

What is especially perplexing about Stephen Wolfe’s defense of cultural Christianity is not simply how he might make sense of its darker moments in the past, but even how it measures up to the New Testament. For instance, he starts with this assumption:

We should first acknowledge that the civil recognition, establishment, and privileging of Christianity was the received and standard view for most of Christian history, amongst most major Christian traditions, including many Protestants, and only recently has it been rejected by a majority of western Christians.

That may be true after 350 AD, but imagine Peter and Paul thinking the privileging of Christianity was the air they breathed when they were receiving inspired and infallible revelations from the Holy Spirit.

Wolfe later asserts in a way that would have left Paul scratching his head:

Again, that might describe Christendom at some point, but how does it make sense of the apostle’s warning to Corinthians against going to court:

If any of you has a dispute with another, do you dare to take it before the ungodly for judgment instead of before the Lord’s people? 2 Or do you not know that the Lord’s people will judge the world? And if you are to judge the world, are you not competent to judge trivial cases? 3 Do you not know that we will judge angels? How much more the things of this life! 4 Therefore, if you have disputes about such matters, do you ask for a ruling from those whose way of life is scorned in the church? 5 I say this to shame you. Is it possible that there is nobody among you wise enough to judge a dispute between believers? 6 But instead, one brother takes another to court—and this in front of unbelievers! 7 The very fact that you have lawsuits among you means you have been completely defeated already. (1 Cor. 6)

If the civil and ecclesiastical are mutually supporting, why is Paul so incensed with the Corinthians for going to court? Might it be that Paul and the early church had no idea about the state reinforcing Christian norms? That’s what persecution means, I believe.

Calvin’s commentary on this epistle also suggests that he, even though living at a time before 1789 when expectations for Christendom were still in place for all Christians except the Anabaptists, was not as convinced of the easy harmony between church and state. The reason is that the magistrate is an avenger and the church is an instrument of God’s love and mercy:

I acknowledge, then, that a Christian man is altogether prohibited from revenge, so that he must not exercise it, either by himself, or by means of the magistrate, nor even desire it. If, therefore, a Christian man wishes to prosecute his rights at law, so as not to offend God, he must, above all things, take heed that he does not bring into court any desire of revenge, any corrupt affection of the mind, or anger, or, in fine, any other poison. In this matter love will be the best regulator.

Of course, Calvin is no Anabaptist. He knows the legitimacy of the magistrate and even the competency of unbelieving civil authorities. But he also senses in ways that critics of modern secular liberalism do not seem to that the purposes of church and state are distinct. One implication is that they are not necessarily harmonious. Especially if upholding the Christian ideal of love.

Perhaps cultural Christianity aspires to such an ideal. But chances are what Christian societies produce when the church is established is more on the order of manners or politeness than the spiritual fruit that comes with sanctification.

14 thoughts on “Does Cultural Christianity Advance the Gospel?”