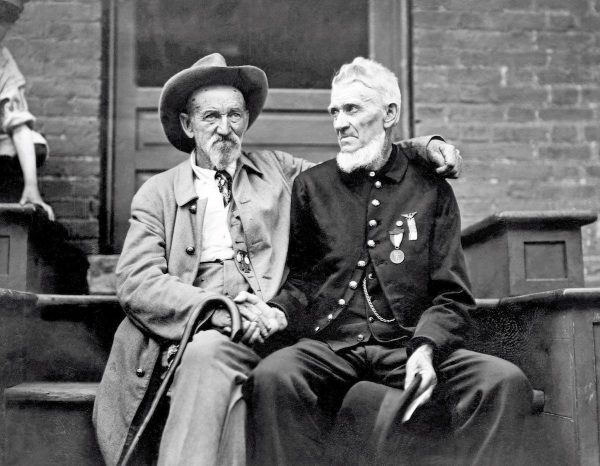 I don’t believe (or much like) the phrase, common grace, but sometimes the insights of the heterodox and even the unbeliever make you wonder about the effects of special grace. Consider Noah Millman’s invocation of Abraham Lincoln for the current pissing match over Confederate Monuments (and oh by the way not all Christians are not using the Port-a-Potties). First Millman credits Lincoln with recommending “charity for all”:

North and South were compacted together within the Union, and both prospered by that union. So both North and South bore the moral stain of slavery, notwithstanding that the slaves themselves were overwhelmingly concentrated in the Southern states, and the social and economic structure of the South changed most by emancipation.

This perspective was what made it possible for Lincoln, in the midst of war, to speak of achieving a just and lasting peace “with malice toward none, with charity for all.” It is easy to argue that such a lasting peace would require honoring the honest—if, in Lincoln’s view, badly mistaken—conviction of men like Robert E. Lee that their actions were not rebellion but a defense of their country. Indeed, it is hard to see what “charity for all” could mean if it did not extend to a man of Lee’s widely-touted honor and integrity, or those who cherish his memory. Reconciliation could be achieved between North and South on the basis that while the political matter of secession was settled on the battlefield, there was honor on all sides. Those were precisely the terms that prevailed from the end of Reconstruction through the era of the Civil Rights movement.

Of course, reconciliation is not easy (and doesn’t come by way of statements and letters):

Reconciliation in the present means reconciliation of conflicting narratives of the past, finding a place for all of our varied common ancestors. But the axes of conflict between those ancestors may, themselves, be irreconcilable.

We may fool ourselves to think that matters are simpler elsewhere. Attila may be honored in Hungary without upsetting the descendants of the cities he sacked; Bohdan Khmelnytsky may be honored as the father of the Ukrainian nation notwithstanding that his men perpetrated the most horrific massacres of Jews between the Crusades and the Holocaust. But the illusion of integral simplicity is as deliberate as it is false, as the currently bloodletting in Ukraine and the escalating authoritarianism in Hungary should demonstrate.

Regardless, no such illusion is possible in America, which is torn not on one seam but on many. Wounds still bleeding must be triaged for present succor, but our national memory must be capacious enough to acknowledge the whole truth, and not only the truth of victory, for there to be any lasting reconciliation. Lincoln’s insight is still relevant. We should properly judge slavery to be an unequivocal evil, and the Confederate cause to have been unsalvageable because it was fundamentally and overwhelmingly that evil cause—not only of defending but of extending slavery. But we should not delude ourselves that, had we sat in our ancestors seats, we would have judged our own cause any more rightly than they did.

Millman is not thinking President Trump will help but is looking to ordinary people for help (can Christian social justice warriors find their inner average?):

Imagine that. Being holy means giving up contempt and hatred for other people and trying to identify with them, you know like, grieving with those who grieve.