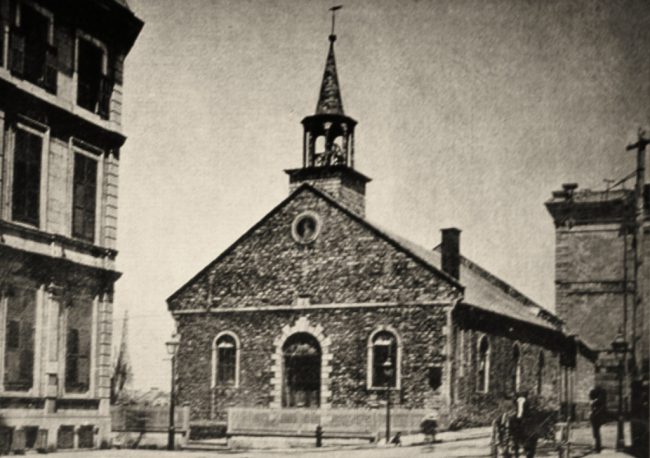 Colonial religion north of the border was no more decent and orderly than it was in the U.S. of A. (though hats off to the Roman Catholics for allowing Presbyterians to use their facility):

For a time after the fall of Montreal to the British in 1760, the Presbyterians were content to worship with the city’s Anglicans. With the arrival in 1786 of John Bethune, a former army chaplain and Church of Scotland minister, they formed a congregation of their own, meeting in a rented room on Notre Dame St. But when Bethune himself moved on to Upper Canada the following year, they moved back with the Anglicans. Hard feelings? None has been recorded.

Then, in 1791, the Presbyterians moved once again to a new foster home, this time to nothing less than a Catholic one. The Recollet fathers invited the Presbyterians to use their handsome chapel in Notre Dame St. for worship once their own Sunday mass was over.

And so they did, for about a year, in front of an altar most unPresbyterian in its embellishment, a hint of incense perhaps lingering in the air. Again, no one seemed to mind.

Like the Presbyterians, the Recollets were used to sharing. They had already lent their chapel to the Anglicans, and in 1809, when the Presbyterians’ church was being reroofed, they would once again welcome the Scots.

The Scotch Presbyterian Church that opened in the fall of 1792 was a plain fieldstone structure seating more than 500 people. In time, it took its name from the street where it stood, St. Gabriel. The site, which backed onto the Champ de Mars, is now occupied by part of the Old Court House on Notre Dame St.

Many Scots in the city, among them James McGill, Alexander McKenzie and William McGillivray, had grown wealthy in the fur trade, and money for the project was quickly raised to build the church. But as The Gazette noted, the speedy five months in which the work was completed also reflected “great honor on the Gentlemen of the Church of England in this City, by their having liberally contributed to the Undertaking.”At least two Catholics also contributed.

The Glasgow-born McGill was typical of the blurred lines among the various denominations here. Arriving in Montreal in 1766, he worshiped with the Anglicans and continued to rent a pew with them even after leaving with John Bethune’s new congregation. When the St. Gabriel St. Church opened, he rented a pew there as well. In 1796, he was happy to serve as the sole Protestant on a provincial commission charged with repairing and maintaining Catholic churches in Montreal.

The Presbyterians’ first minister, John Young, was an odd man. He was physically imposing – he stood six-foot-six tall, with “an eye in his head like a hawk” – but his character was flawed. Almost certainly, he was an alcoholic and what we would now call a problem gambler.

In 1788, he became pastor of a united congregation in Schenectady and Currie’s Bush, in upstate New York. But two years later, he sought to resign when his flock brought serious charges against him, probably for drunkenness. Chagrined, he made his way to Montreal and, a minister without a congregation, was doubtless pleased to find himself wooed by a congregation without a minister.

In December 1790, he was cleared of the original charge of misconduct. But when the American Presbyterians then censured him for “abruptly leaving his charge, in the sight of the slanderous accusations, and taking a journey into Canada without the knowledge of his people,” he surely concluded he had little future in Schenectady. He briefly returned, before finally throwing in his lot with the Montrealers early in 1791.

He was then about 32 years old, and was soon conducting services for the Presbyterians here. On Sept. 18, in the Recollets’ chapel, he administered the sacrament of the Lord’s Supper “in accordance with the usages of the Church of Scotland.” He took a leading part in the campaign to build a permanent home for his congregation.

One thought on “O Canada!”