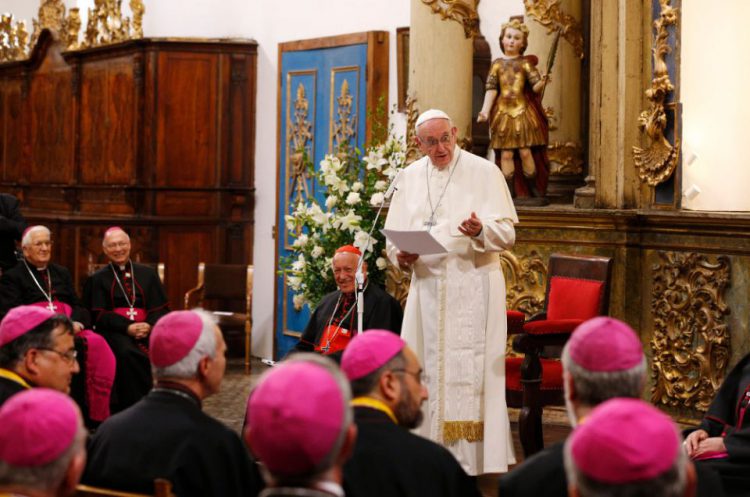 On the one hand, Roman Catholicism is nothing without the papacy:

There is nothing more distinctly Catholic than the papacy. While just about every other Catholic belief can be found in at least some other Christian denominations, our beliefs about the papacy are unique. Nobody else believes that the bishop of Rome has jurisdiction over the entire Church or that he can infallibly define dogmas; only we do. As a result, these doctrines are essentially what make us Catholic rather than Protestant or Orthodox, so they are extremely important for us.

In addition to the papacy, you need the magisterium:

There is agreement among all Christians that Holy Scripture is the Word of God. But since this Word is conveyed in human language, it does not have the evidence (quoad se—in itself) that the Protestants want to attribute to it. Rather, there is need for a human interpretation on the part of the teachers of the faith whose authority comes from the Holy Spirit. Toward those who hear the Word of God, these teachers represent God’s own authority, making use of human words and decisions (quoad nos—to us). The task of authoritative teaching and governing cannot be left solely to the individual believer who in his or her conscience comes to accept a certain truth. After all, revelation has been entrusted to the Church as a whole. Therefore, the Magisterium is an essential part of the Church’s mission. Only with the help of the living magisterium of the pope and the bishops can the Word of God be passed on in its integrity to the faithful and to all the people of all times and places.

On the other hand, you endure clericalism:

Clericalism affects the whole church. It has been accepted and even lauded by clergy as if it is an anticipation of the Kingdom yet to come. Its hold on us rests comfortably in the symbolic imagination of Roman Catholicism and the Orthodox churches of the East, at once their charm and their curse. That structure must be radically reviewed and reformed if the faith and hope and healthy life of the church are to be revived. As a Quaker colleague once put it to me: “What American adult wants to belong to a church in which he is treated as a child?” Clericalism infects the other Christian churches to a lesser degree and variously, but the Roman Church has simply collapsed under its weight.

According to some, there is nothing to be done about the crisis because the clergy-lay distinction is a matter of the divine will; in other words, “It’s Tradition, a very, very, very old Tradition!” Or could it be that there is something that can and ought to be done that is so radical and church-embracing, so chilling, that it is beyond clerical contemplation? If indeed clericalism is the problem, then the solution is the elimination of that division between clerical and lay Catholics. I am not opposed to leadership, to authority, to structure, to ministry, even to its three-tiered Roman Catholic articulation, but I am opposed to its sacrality and its sanctification. I suppose I am now advocating anti-clericalism, an instinct almost as old as clericalism itself, a historical protest against what the priesthood has done to the church (and a lot for the church, it must be said) through nearly two millennia. Can we count on the clergy to eliminate clericalism? Or the bishops? Or the pope? Not likely! They may badmouth it on occasion, much to their credit. But undo it? Never.

Protestants did not fix this, but they did localize church government. The downside for Protestants is a lack of unity. The upside is not having to act like the apostles’ successors know how to interpret the Bible better than you (as long as you know Greek and Hebrew).