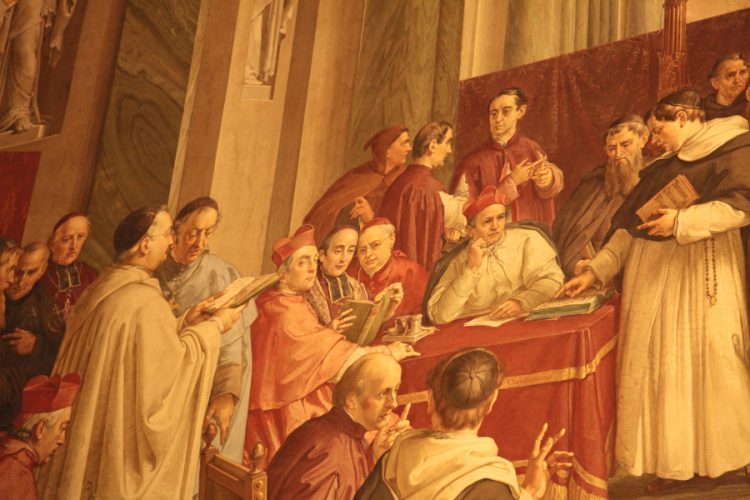 R. J. Snell responds to a piece a while ago about the flap over Edgardo Mortara at First Things:

When the Church is speaking for itself, its teachings do not lead to anti-liberalism.

This handy distinction seems to be a way to avoid Augustine’s views on religious liberty:

As Augustinians, Shields elaborates, Catholics define liberty not as “freedom from constraint” but as acting in conformity with the good. Once defined in that way, liberty cannot primarily mean (as it meant to Locke, Mill, and other founders of modern liberalism) “freedom to choose, freedom from constraint, freedom from coercion.” Instead, in the Augustinian view as described by Shields, the purpose of the state is not to secure a morally neutral freedom in consonance with whatever vision of the good life citizens happen to hold. Rather, it is to “orient citizens” toward the genuine liberty that leads to collective salvation. While “Catholic integralism,” as this position is sometimes termed, “may not be a necessary consequence” of the Augustinian vision of liberty, anti-liberal Catholics are disposed in its direction.

Snell goes on to say that this is not what John Paul II taught:

In 1993, for instance, John Paul II, quoting among other things the Declaration on Religious Freedom (Dignitatis Humanae) issued in the mid-1960s at Vatican II, taught that humans have a duty to follow their own conscience, since “God willed to leave man in the power of his own counsel,” with individuals “free and self-governed, swayed autonomously by [their] own will.” Of course, the Church also continues to insist that human conscience lacks the right to create moral value, and that persons attain genuine liberty when freely choosing the good. Yet mark the word “freely”: no one is to be, or coherently can be, coerced into either faith or liberty—such coercion is wrong and contradictory.

John Paul II similarly insists that individuals and political communities alike have a “rightful autonomy”: the “autonomy of earthly realities” in which “created things have their own laws and values . . . discovered, utilized, and ordered by man”—not by the Church. To the contrary, in recognizing the freedom of the individual, the Church also recognizes the autonomy of disciplines of knowledge, society, and legitimate political authority.

But the problem of Pius IX remains. When he was speaking — the Syllabus of Errors (which condemned political liberalism, for starters), for instance — apparently someone pretty high up in the church was the voice of the Vatican. Now, Snell might argue that John Paul II came later than Pius IX, and so the most recent teaching of the papacy matters, sort of the way you can see the development of an author and differentiate the early Wendell Berry from the late Wendell Berry.

That only increases the problem for Snell, however. The church is not supposed to have recent and early voices. Rome is not supposed to change. It is the rock in the history of West which resists modernity, the church Jesus founded in 30 AD and all.

Except that the Second Vatican Council broke widely with Pius IX (among many other popes). That means that something comparable was happening in Roman Catholicism to what was going on in the Presbyterian Church U.S.A. when the latter adopted the Confession of 1967.

2 thoughts on “Wasn’t Pius IX Speaking for the Church?”