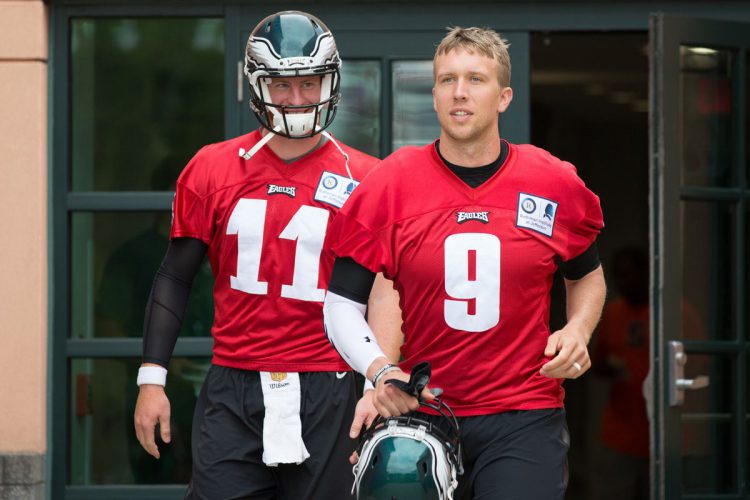 On this morning’s broadcast with Angelo and company, I heard Carson Wentz describe the bond he shares with Nick Foles by virtue of a common faith.
I’m sure many evangelicals were encouraged.

But I could not help but wonder what would happen when Carson learned that his Lutheran church (I’m speculating) would not welcome Nick to preach because the Eagle’s backup QB is evangelical, not Lutheran. What happens when ecclesiastical requirements get in the way of the bond that comes from being born-again? What even happens if being Presbyterian gets in the way of participating in The Gospel Coalition? The Allies claim “We are a fellowship of evangelical churches in the Reformed tradition deeply committed to renewing our faith in the gospel of Christ and to reforming our ministry practices to conform fully to the Scriptures.” How can that be? How can you be evangelical and in the Reformed tradition “deeply”?

This is a fundamental tension between Protestants who trace their roots back to the Reformation (Anglican, Reformed, Lutheran) and those who only go as far as the First Pretty Good Awakening. For confessional Protestants, fellowship has standards. But for evangelicals, the bar is low.

And that is why you need to give up a lot if you are a Presbyterian to become an evangelical. If beliefs and practices about theology, worship, and church government matter to being a Christian, then the Reformation gets in the way of being evangelical. But if being born-again is what matters, then you don’t really need the Reformation.

Machen knew the score on this one (came across this after hearing Angelo and Carson):

One of the very greatest evils of present-day religious life, it seems to me, is the reception into the Church of persons who merely repeat a form of words such as “I accept Christ as my personal Saviour,” without giving the slightest evidence to show that they know what such words mean. As a consequence of this practice, hosts of persons are being received into the Church on the basis, as has been well said, of nothing more than a vague admiration for the moral character of Jesus, or else on the basis of a vague purpose of engaging in humanitarian work. One such person within the Church does more harm to the cause of Christ, I for my part believe, than ten such persons outside; and the whole practice ought to be radically changed. The truth is that the ecclesiastical currency in our day has been sadly debased; Church membership, as well as Church office, no longer means what it ought to mean. In view of such a situation, we ought, I think, to have reality at least; instead of comforting ourselves with columns of church statistics, we ought to face the facts; we ought to recall this paper currency and get back to a standard of gold.

To that end, it should, I think, be made much harder than it now is to enter the Church: the confession of faith that is required should be a credible confession; and if it becomes evident upon examination that a candidate has no notion of what he is doing, he should be advised to enter upon a course of instruction before he becomes a member of the Church. Such a course of instruction, moreover, should be conducted not by comparatively untrained laymen, but ordinarily by the ministers; the excellent institution of the catechetical class should be generally revived. Those churches, like the Lutheran bodies in America, which have maintained that institution, have profited enormously by its employment; and their example deserves to be generally followed. (What is Faith?, 156-57)

628 thoughts on “The More Evangelical You Become, The Less Presbyterian”