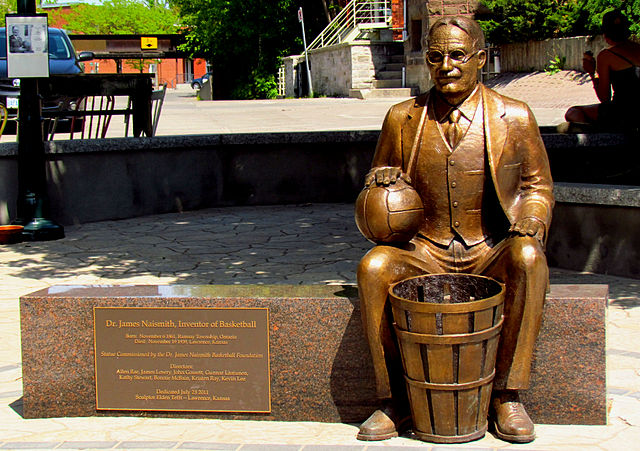 With all the recent talk about birthright citizenship, one that has bearings on infant baptism, I am at a loss about basketball. Is it Canadian, Presbyterian, or American? It depends on how we categorize the game’s creator.

But do you know that the inventor of basketball was a Presbyterian?

His name was James Naismith. Born in Canada on November 6, 1861 in a town no longer in existence, James and his four brothers and sisters grew up in difficult circumstances. His Scotch parents had emigrated from Scotland to Canada, but died after a few years in their new country, leaving James and his brothers and sisters to be reared by a strict uncle. They moved a few times, with James always being involved in sports, like rugby, soccer, football, lacrosse and gymnastics. He would graduate from McGill University in Montreal as well as earning a diploma from the Presbyterian seminary in Montreal in 1890. While never did he become ordained, he did minister in the pulpits of Canadian Presbyterian Churches.

It was while he was working at the YMCA International Training School in Springfield, Massachusetts that James Naismith was given the task by his employer to “come up with” an indoor game which would help the youths of the district to mature into young adults. The assignment, which was given a fourteen day limit, resulted in what we know as basketball.

Granted the ten rules which he wrote down were changed as the new sport developed. For example, the first basket at either end was a peach basket! When the soccer ball, which was first used, would be shot into it, it stayed there until someone climber a ladder at either end of the court to remove it. Time was lost in that exercise until a net and a “basketball” was used.

James and his wife moved to the United States and became citizens. Eventually, he was hired by the University of Kansas to be its basketball coach. Interestingly, he had more losses than wins in the university at Lawrence, Kansas. But others, including some he had trained, became more proficient in the sport, and today . . . it is found the world over.

Here’s the problem. Naismith invented the game when he was 30 years old. He did not become a citizen of the U.S. until he was 55.

That means basketball started on U.S. soil — good news for the birthright folks. But the man inventing the game was still Canadian.

If citizenship matters, basketball is Canadian.