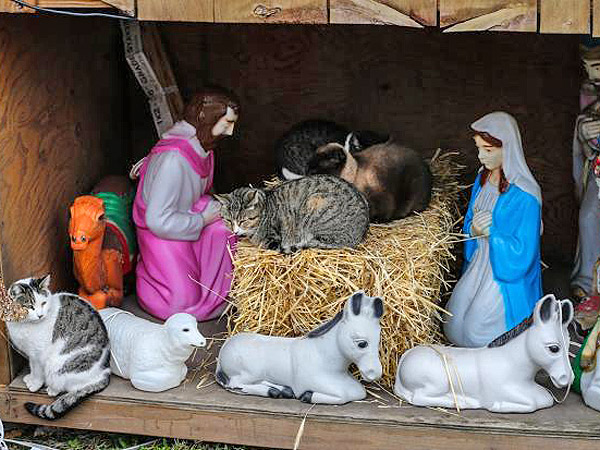 It has become a cliche to regard the incarnation as providing an upgrade for humanity and even all of creation. Consider this from Michael Sean Winters:

We Catholics believe that human nature is changed and uplifted precisely because our God chose to don it. Human nature, you might say, was the first “gay apparel” of Yuletide. If the Passion, Death and Resurrection of the Lord relativizes our humanity to his divinity, Christmas celebrates the relativization of his divinity to our humanity. It is because of this twin relativization that Jesus was able to overturn manmade precepts with such determination, to cut away the cultural encrustations and get to the kernel within, to proclaim a new day of favor

Truth be told, divinity does not merge with humanity, not even in Jesus himself. Remember what the bishops affirmed at Chalcedon:

begotten before all ages of the Father according to the Godhead, and in these latter days, for us and for our salvation, born of the Virgin Mary, the Mother of God, according to the Manhood; one and the same Christ, Son, Lord, only begotten, to be acknowledged in two natures, inconfusedly, unchangeably, indivisibly, inseparably; the distinction of natures being by no means taken away by the union, but rather the property of each nature being preserved

The hypostatic union does not blur or merge or combine Christ’s human and divine natures. The Westminster Divines were also explicit about keeping the human and divine distinct even though in one person:

The only mediator of the covenant of grace is the Lord Jesus Christ, who, being the eternal Son of God, of one substance and equal with the Father, in the fullness of time became man, and so was and continues to be God and man, in two entire distinct natures, and one person, forever. (WLC 36)

In which case, if the incarnation did not divinize Christ’s human nature, then how could it Christ’s birth and life conceivably sacralize the rest of humanity and human civilization?

Be careful out there.

33 thoughts on “How To Avoid Christological Heresy this Christmas”