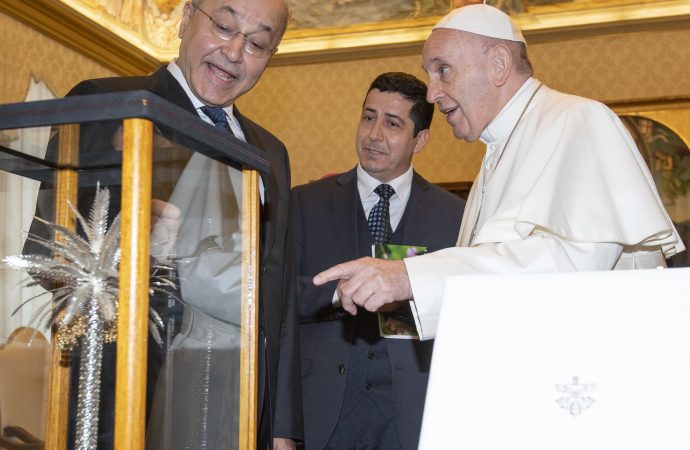 The Guardian has a story that should trouble 2kers. It’s about the influence of evangelicals, holding office, mind you, and responsible for foreign policy in the Middle East:

In his speech at the American University in Cairo, Pompeo said that in his state department office: “I keep a Bible open on my desk to remind me of God and his word, and the truth.”

The secretary of state’s primary message in Cairo was that the US was ready once more to embrace conservative Middle Eastern regimes, no matter how repressive, if they made common cause against Iran.

His second message was religious. In his visit to Egypt, he came across as much as a preacher as a diplomat. He talked about “America’s innate goodness” and marveled at a newly built cathedral as “a stunning testament to the Lord’s hand”.

The desire to erase Barack Obama’s legacy, Donald Trump’s instinctive embrace of autocrats, and the private interests of the Trump Organisation have all been analysed as driving forces behind the administration’s foreign policy.

The gravitational pull of white evangelicals has been less visible. But it could have far-reaching policy consequences. Vice President Mike Pence and Pompeo both cite evangelical theology as a powerful motivating force.

Just as he did in Cairo, Pompeo called on the congregation of a Kansan megachurch three years ago to join a fight of good against evil.

“We will continue to fight these battles,” the then congressman said at the Summit church in Wichita. “It is a never-ending struggle … until the rapture. Be part of it. Be in the fight.”

This is not good on two counts. First, it mixes the church and the state. Second, it uses bad theology for one of the mix’s ingredients. Good for Julian Borger to catch this.

But what about when the Vatican does the same thing (but without the Word of God)?

Though the week between Christmas and New Year’s is traditionally a fairly slow period on the Vatican beat, this is the Pope Francis era, when tradition and a Euro will buy you a cup of cappuccino in a Roman café.

Thus it’s entirely fitting that arguably one of the Vatican’s most important diplomatic encounters of 2018 came the day after Christmas, when Italian Cardinal Pietro Parolin, the Secretary of State, met Iraqi President Barham Salih in Baghdad.

During the meeting, Salih extended an invitation to Pope Francis to visit the Iraqi city of Ur, the Biblical city of Abraham, for an interreligious summit. It’s a trip that St. John Paul II desperately wanted to make in 2000, during a jubilee year pilgrimage to sites associated with salvation history, but the security situation at the time made such a trip impossible.

There was no immediate word from the Vatican whether Francis intends to accept the invitation, although there has been some media buzz about an outing coming as early as February. Doing so would be entirely consistent with his penchant for visiting both the peripheries of the world and also conflict zones.

Parolin was accompanied in the Dec. 26 meeting by the Patriarch of the Chaldean Catholic Church in Iraq, the largest of the Eastern churches in communion with Rome in the country, Cardinal Louis Raphael Sako. That was an important signal, in part underlining that the Vatican isn’t interested in pursuing a parallel diplomatic track with Baghdad that doesn’t prioritize the concerns of the local church.

(That’s a real concern, given the fact that critics insist the Vatican has done precisely the opposite in some other parts of the world, including China and Russia.)

According to a statement afterwards from the Iraqi president’s office, Salih and Parolin discussed the importance of different religions working together to combat extremist ideology “that does not reflect the beliefs and values of our divine messages and social norms.”

The statement also said the two leaders discussed the situation facing Christians in Iraq, talking “a great deal” about how to maintain their presence in the country and to assist in rebuilding their homes, businesses and places of worship in the wake of devastation caused by ISIS and other extremist Islamic forces.

Is it because the Vatican has been engaged in foreign policy for a millennium, compared to evangelicals who have only been at it maybe 30 years tops, that allows reporters to take Bishops’ influence on temporal rulers for granted?

Or are evangelicals scarier because with the executive branch of the U.S. federal government they have more power than the pope?

If so, that’s true audacity.

One thought on “If You Worry about Pompeo, Why Not Pope Francis?”