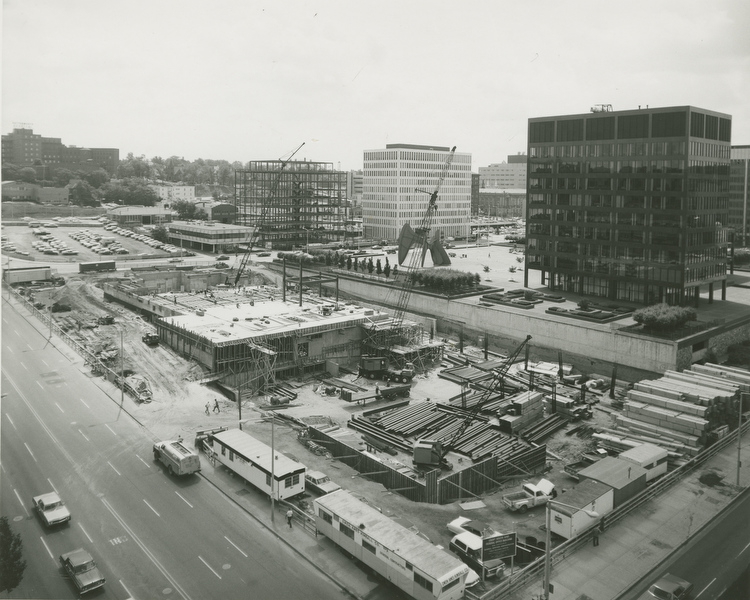 Is this what Tim Keller and the redeemers of culture had in mind?

Grand Rapids, Michigan, was one of the first cities to go in for the complete redevelopment of its downtown area using Title III money from the 1949 Housing Act as amended in 1954. In 1959, Grand Rapids invited to town John Paul Jones, a planning consultant from the New York firm of Ebasco. He blew in with lots of energy and big ideas for the complete reconstruction of downtowns using federal funds to cover two thirds of the cost. In July of that year, he proposed more than a million square feet of government office space and 13,500 new parking ramp spaces. Retail and residential uses were no longer part of the picture. They were separated out. In August of 1960, the citizens of Grand Rapid were sold on the plan to revitalize the downtown. They approved a 1.75 mill property tax hike to the pay the city’s share of the redevelopment costs. In September of that year, Jones was appointed the new planning director of Grand Rapids, and soon the wrecking balls and bulldozers went to work, taking down all the buildings in a forty-acre, twenty- two-block area. The Richardsonian Romanesque city hall andKent County buildings were reduced to rubble. Sleek office towers were built on huge superblocks, creating a sterile urban environment that few would visit unless they worked for a bank, were called for jury duty, or wanted to contest a utility bill. The promised revitalization of the downtown did not happen. After 6 pm, the place is a ghost town.