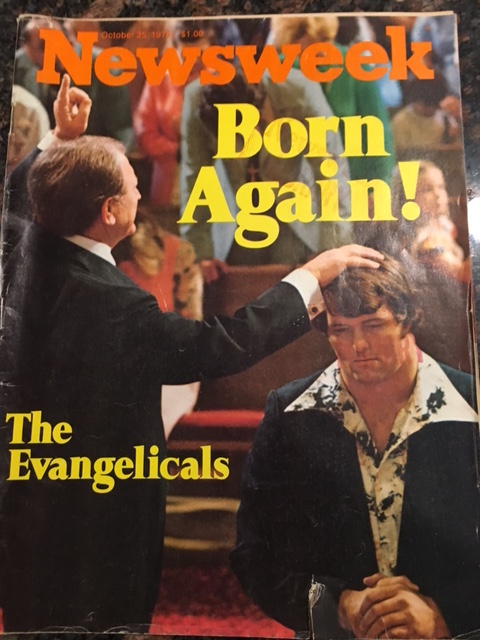 John Turner provides relief for those tired of the complaint about evangelical hypocrisy in voting for Donald Trump:

American evangelicals, white and otherwise, are far more interested in charity and evangelism than they are in politics. As Kidd comments, “charitable action is a more constant attribute of evangelicals than Republican political engagement is.” He then concludes, “we should not define evangelicalism by the 81 percent.” Rather, “being an evangelical entails certain beliefs, practices, and spiritual experiences.” For Kidd, voting for Donald Trump is tangential rather than central to the reality of most American evangelicals.

Two thoughts. 81%! Kidd suggests that pundits and scholars are hampered by definitional confusion about the definition of evangelical. Pollsters count many people as evangelical who would not define themselves that way. Still, 81%! I think Fitzgerald is correct. It’s not just that most nominal evangelicals voted Trump. Most committed, church-going white evangelicals did so as well. In fact, the more frequently people attended church, the more likely they were to vote Trump. This is one reason I attend a Presbyterian church. There’s no midweek worship, and you can be in and out in a shade more than an hour on Sundays. This inoculates me against Trump-voting. I won’t spend more time in church until after he leaves office, just in case. Hopefully he’ll be gone by the end of January 2020, and I can safely worship more frequently.

At the same time, I think we as historians err if we define evangelicalism – or our interests in evangelicalism – by that political statistic. Evangelicalism is not a political movement. Most churches that one might reasonably categorize as evangelical are not especially political, let alone hyper-partisan. Rather, those evangelical churches focus on weekly worship, small-group Bible studies, support for missions, and all sorts of other activities that rarely catch the attention of pundits.

Evangelicalism is primarily a phenomenon of religion. That makes sense.

But what did the emergence of the religious right during the Reagan era do to the scholarship on evangelicalism? And would anyone care about evangelicalism (if such a thing exists en mass) if not for politics?

In 1978, when Ernest R. Sandeen and Frederick Hale compiled an annotated bibliography on religious history, American Religion and Philosophy, evangelicalism did not even register an entry in the subject index, and the title index contained only four books or articles. By the early 1990s, when Butler felt he was drowning in a sea of born-again historiography, evangelicalism not only claimed more space in standard reference works but had grown to need its own. In 1990, Joel Carpenter and Edith Blumhofer produced the first bibliography exclusively on evangelicalism, Twentieth-Century Evangelicalism: A Guide to the Sources; and Norris Magnuson enlarged the corpus with American Evangelicalism: An Annotated Bibliography (1990), which he supplemented in 1996 with a second volume, American Evangelicalism II: First Bibliographical Supplement, 1990–1996. Reference works may not be the best guide to a subject’s popularity, but they do help to confirm that, during the last quarter of the twentieth century, evangelical Christianity went from merely a footnote in the fundamentalist controversy to a threat to the preeminence of mainline Protestantism.

The new scholarship on evangelicalism is clearly related to the surge of born-again involvement in electoral politics. Had the Jerry Falwells and Pat Robertsons not emerged throughout the 1980s and 1990s as politically powerful, most non-evangelical academics would have had few reasons to care about the development and legacy of revivals, biblical inerrancy, the second coming of Christ, or the events of the first chapter of Genesis. Christine Heyrman conceded in Southern Cross (1997) that “Evangelicalism’s complex beginnings in the early South would probably claim the curiosity of only a small circle of historians were it not for the fact that this legacy now shapes the character of conservative Protestant churches in every region of the United States.” Despite the boost the Protestant Right gave to students of evangelicalism, born-again historians have remained remarkably silent on politics, let alone evangelicalism’s assumed default political perspective, conservatism.

So as much as I want to agree with Turner, I continue to think that the world of evangelical higher learning and scholarship would not exist if not for a wider public wanting to know something about the politics of those odd people with Jesus in their bosoms.

One thought on “The Politics of Scholarship on Evangelicalism”