When you ask the church to do something that it can’t, you have a problem.

Left leaning commentator Matthew Yglesias, who’s Jewish, tweeted today: “Think I’m becoming a Straussian/Putnamist who instrumentally wants to get everyone to go to church again.” Columnist Ross Douthat, who’s Catholic, responded: “Be the change you seek.” Yglesias retorted: “Not gonna sell out the chosen people like that! But I’m gonna go neocon and root for the Christians vs the post-Christians.”

Tooley then goes on about how much Protestant churches civilized America:

Churches and denominations were central to building America’s democratic ethos. They civilized and socialized the early frontier. They created a wider civil society supporting politics, education, charity and community building. Regular church goers have never been a majority in America. But churches as institutions were foundations and pillars of wider society that benefitted all. Typically savvy non religious people have recognized their centrality to American culture and civic life.

He even defends civil religion:

What critics of civil religion fail to see is that Christianity has a duty to society to help create the language and architecture for constructive civil life that benefits all. Christianity wants all to be fed, clothed, housed, provided health care, treated with dignity, given security, and equipped with the political tools to live harmoniously in peace. Christians seek the common good for all society, not just what directly benefits themselves. But this promotion of the common good certainly benefits Christians and itself witnesses to the power, grandeur and truth of the Gospel.

This is out of the playbook of Tim Keller on the church and social capital.

Tooley thinks that evangelicals and secularists fail to see the value that churches add to civil society:

Nondenominational Christianity and evangelicalism often lack this long history and self-understanding as cultural stewards. They often focus more exclusively on individual faith and spiritual needs sometimes from a consumerist perspective. Sometimes their adherents see themselves more as a tribe or a subculture than as parcel to wider society with wider responsibilities.

That could be the reason for some. But for others, the problem is that the social mission of the church is not only hard to find in Peter or Paul or Jesus (is that bar too high?), but also that when Protestants were best at creating social capital, they forgot about Jesus and the world to come. That’s why Machen was important. He saw what the social purpose of the church was doing to stuff like doctrine, preaching, evangelism, and missions.

The rejection of the Christian hope is not always definite or conscious; sometimes the liberal preacher tries to maintain a belief in the immortality of the soul. But the real basis of the belief in immortality has been given up by the rejection of the New Testament account of the resurrection of Christ. And, practically, the liberal preacher has very little to say about the other world. This world is really the center of all his thoughts; religion itself, and even God, are made merely a means for the betterment of conditions upon this earth.

Thus religion has become a mere function of the community or of the state. So it is looked upon by the men of the present day. Even hard-headed business men and politicians have become convinced that religion is needed. But it is thought to be needed merely as a means to an end. We have tried to get along without religion, it is said, but the experiment was a failure, and now religion must be called in to help. (Christianity and Liberalism)

How does Tooley think the mainline churches went off the rails? Some conservatives believe it happened because pastors let this world become as important as the world to come, not to mention that talking about otherworldliness with members of Congress and professors at Yale produces cringe.

But if you want to see Tooley’s argument salvage a Protestant liberal as a conservative, look at Geoffrey Kabaservice’s rendering of William Sloane Coffin, Jr., who according to the New York Times combined the social gospel with 1960s activism (at Riverside Church, “an institution long known for its social agenda — he used his ministry to draw attention to the plight of the poor, to question American political and military power, to encourage interfaith understanding, and to campaign for nuclear disarmament”).  But liberal Protestantism can become conservative when it supplies social glue:

In doctrinal terms, Coffin was indeed a conservative, even an orthodox one. He retained the traditional Protestant liturgy, from the opening prayer to the confession to the benediction, resisting the wave of reform that swept over most denominations in the 1960s. His congregation sung the powerful old New England hymns. . . . The civil rights and antiwar activism of the 1960s seemed part of a much older American history when set to the hymn’s ominous, rolling cadences and the spine-tingling words of McGeorge Bundy’s ancestor, the nineteenth-century poet James Russell Lowell: “once to every man and nation / Comes the moment to decide, / In the strife of truth with falsehood, / For the good or evil side; / Some great cause goes by forever / ‘Twixt that darkness and that light.”

If social ministry can turn Coffin into a conservative, even doctrinally orthodox Protestant, Tooley has some work to do.

Here’s maybe not the but a thing: civil society does not depend on Christians. Believers often make good neighbors, though you’d never know from evangelical scholars these days. Invariably, Christians take out the trash, support Little League, donate books to the public library’s book sale fund raiser, approve of taxes to support police and fire departments. They also vote, which can be an anti-democratic form of social behavior if the ballot goes for the wrong candidate. If civil society has declined in America, it is not because of churches or their members. Rotary, the Elks, and Odd Fellows have also faded in the fabric of American society. For a host of reasons, Americans don’t join a host of voluntary organizations any more. One hunch is the social world that the internet has created. Another factor may be the outgrown size of national politics in the attention of journalists, teachers, and even radio talk show hosts.

But even if the path to a health America went through the social capital generated by churches, the question remains: is this what Scripture teaches? 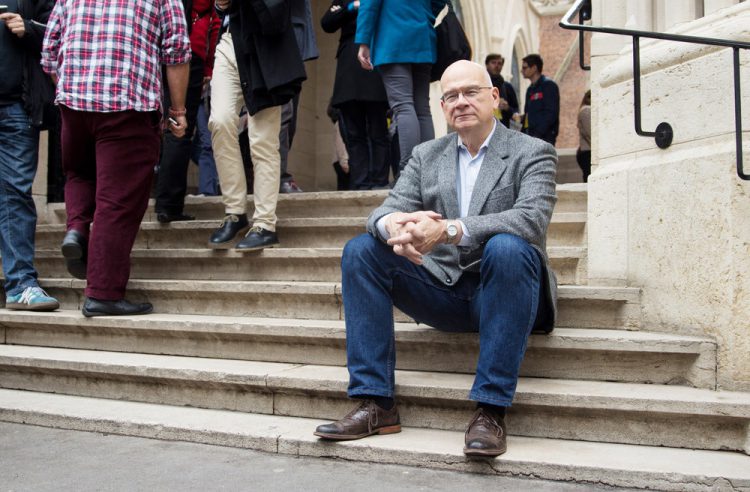 Tim Keller explained to people who write about charities and philanthropy the contribution that churches make to “human flourishing”:

Philanthropy: How does a healthy church benefit the community at large beyond its own members? On the flip side, when a neighborhood doesn’t have a flourishing church, what is it missing out on?

Keller: Churches promote cooperation between individuals and the kind of associational life that is necessary for human happiness and social success. Without informal shared trust, things are more litigious and combative. Life is much better when neighbors pull for each other, help each other, collaborate together. But this kind of “social capital” is very difficult to generate through public policy. Governments cannot duplicate the effect of religion as a source of shared values.

Family ties and religious ties are the two biggest sources of social capital. And religion can be fed and bolstered as a source of valuable shared experience. I, as an older white American man, can connect quite sincerely to a single poor African woman in Soweto because we are both evangelical Christians. There’s a powerful bond because we’ve had the same experience of spiritual rebirth. There’s a trust I have that would not exist if I was a non-Christian white man.

Anywhere you’ve got a church, social capital is being created. Especially when the church is attended by people from the surrounding neighborhood. And it’s a big benefit to the community.

Also, church buildings in big cities are a kind of public utility. We bought a parking garage in upper Manhattan and converted it into a church and all the homeowners on the block who were not believers said, “Thank you, you’re improving the whole block.” The city council asked if various local groups could use the building, saying, “We’re starved for space.” Our building became a community center. Organizations can meet there, people can have weddings and other celebrations there. On a Sunday, urban churches create the foot traffic all the restaurant owners and shop owners want. So in all kinds of ways an urban church has huge benefits, as long as it doesn’t have a fortress mentality.

For a fellow with the reputation of presenting the gospel to secular Americans in ways that make it accessible and also clear, Keller comes up short and resorts to language that would actually wind up supporting Roman Catholic parishes, synagogues, and mosques as religious places that increase social capital.