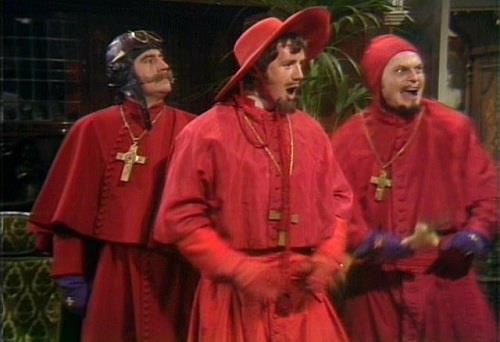 Some contemporary critics are debating whether Christians are experiencing something closer to a witch hunt or an inquisition. Turns out, the inquisition is worse:

By contrast, the purge of traditional Christians and Jews is a heretic hunt, an Inquisition, whose objective is to isolate and punish individuals who actually profess opinions contrary to the prevailing orthodoxy. There can be some overlap between an Inquisition and a witch-hunt, to be sure. But today’s liberal Inquisitors are not searching for individuals secretly in communion with God—yet.

This is a critical distinction. Witch-hunters eventually discover that burning a few old hags does not prevent cows’ milk from souring. Inquisitions, by contrast, usually succeed: The Catholic Church succeeded in stamping out broadly held heresies, as in the Albigensian Crusade of 1220-1229, which destroyed between 200,000 and 1,000,000 inhabitants of Cathar-controlled towns in Southern France. In many cases a town’s entire population was killed, just to make sure. For its part, the Spanish Inquisition eliminated all the Jews, Muslims, and Protestants, although it sometimes drove heretical opinions underground, with baleful consequences for the Catholic faith. (From David P. Goldman via Rod Dreher)

So, converts to Rome want to identify with all of THAT history? And were the glories of Christendom all that glorious?

But if you can defend that part of the church’s history, the recent past is easy peasy.

2 thoughts on “No One Expects the Puritan Witch Hunt”