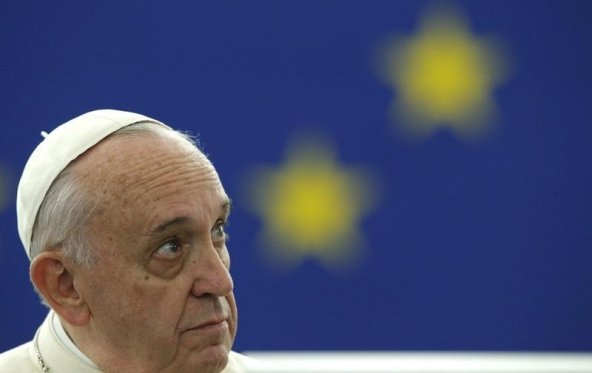 Massimo Faggioli reminds that Vatican II and the European Union are part of the same cultural moment:

The simultaneity of the Dublin conference and Brexit made me think about the tight relationship between development of Catholic theology (especially ecclesiology) in the 20th century and the development of Catholicism from multinational to truly internationalist/globalist. Catholic support for the European project after World War II (from Pius XII to the most important politicians of the Christian-Democratic parties governing Europe after 1945) was part of the transition from the nationalist, romantic roots of the theological ressourcement between the mid-19th century and the 1920s and ’30s. At Vatican II, Catholic theology internationalized what had been born as expressions of national movements during the previous century (adoption of the vernacular; the new role of national bishops’ conferences; anti- Curia sentiment; anti-capitalist, anti-democratic, and anti-liberal Catholic social movements, etc.). The internationalist quality of Pacem in terris and Gaudium et spes was a turning point in doctrine concerning the state and government in Catholic theology, and also a response to the most powerful internationalism of the second half of the century, Communism. At Vatican II, Catholicism became an advocate of globalization, which John XXIII had called in the opening speech of the council in 1962 “a new order of human relations.”

The ties between Vatican II and the EU are even closer in the minds of traditionalist Roman Catholics:

Brexit can be seen as a subset of the debate on Vatican II and the post-Vatican II period, at least among Catholics. It’s no secret that Catholics and the Catholic bishops of Britain were deeply divided over Brexit, and that for many conservative Catholics in Britain opposition to the EU and to Vatican II has similar roots. Traditionalist Catholics who today reject “the new order”—in terms of economic and social exclusion, as well as of the dominance of what Francis in Laudato si’ called “the technocratic paradigm”—tend to put Vatican II and the EU together in one category of internationalization and globalization; they choose a traditional, pre-global church and a nation-state (even though this fallback on the nation-state is for them theologically not unproblematic) as opposed to the larger framework of a globalized ecclesial context and a European political union. It is an opposition to a much more complex world, politically and theologically, and to the modern, globalized attitudes toward vulnerable life, marriage, family, subsidiarity, immigration, war, and peace. It is an opposition that puts back into question the Catholic perception of political power, and in particular the church’s perception of the sovereignty of the nation-state and of international/supranational institutions.

Meanwhile, Damon Linker notices aspects of Angela Merkel’s responsibility for the circumstances that led to Brexit that could also be applied to Pope Francis, perhaps the post-Vatican II pope that most embodies Vatican II:

Angela Merkel is the real catalyst behind the outcome of the UK referendum. Not only did the German chancellor insist on admitting well over a million refugees and migrants from the Greater Middle East into the heart of Europe. Supporters of the policy have also made it clear on numerous occasions that they consider racism and xenophobia to be the only possible grounds for opposing her stand.

From the standpoint of progressivism, this makes perfect sense. An open-door policy toward refugees and migrants fleeing unrest in the Levant and North Africa is obviously the only morally acceptable option. It shouldn’t matter whether those immigrants are Muslims, or if they’re Syrians or Libyans, skilled or unskilled, poor or middle class, literate or illiterate, eager to assimilate or convinced of the need to resist it, looking for freedom and pluralism or hoping to build an enclave of Sharia law within the West. And there’s certainly no reason to suspect that any of them might turn toward terrorism, now or a generation from now. They’re just placeless people — human beings in need of aid, comfort, and charity. That’s all that should matter.

Except that many millions of citizens in EU member countries don’t see it this way. It does matter to them, just as it also matters to them whether Turkey is eventually invited to join the union, and they don’t appreciate having their concerns about the ethnic, religious, linguistic, and economic character of their political communities dismissed as moral pathologies.

Nor do they care to have their religious institutions circumscribed by remote bishops and cardinals. Pre- or post-Vatican II, subsidiarity matters.

3 thoughts on “The Theology of Brexit”