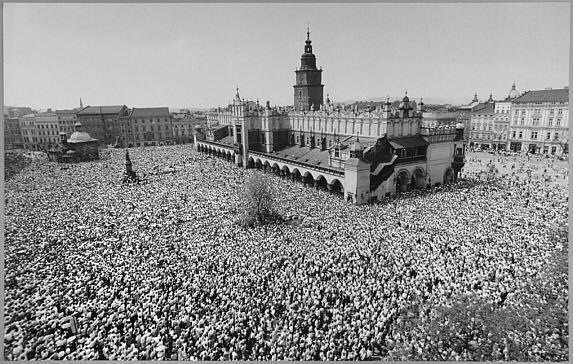 Once upon a time Andrew Sullivan edited The New Republic. Once before that time, Sullivan was a graduate student in political theory at Harvard. He was and still is a practicing Roman Catholic. He is also of English descent and gay. Those may be reasons why he spotted way back when he was a graduate student what many contemporary converts never seem to contemplate — namely, that being American and Roman Catholic are incompatible identities. The same goes for Reformed Protestants, though you’d never know about any tension between church and nation — unless the nation is blowing it — from the every-square-inchers, the neo-Confederates, or the God-and-country Calvinists who dominate mainline and sideline Presbyterian churches. But Roman Catholicism comes to the U.S. table with different bags and Sullivan understood why thirty years ago:

There was a moment on the pope’s recent visit to Chile that still lingers in the mind. Tear gas was fired into the crowd in Santiago, Rioting broke out within a stone’s throw of the altar. And John Paul II knelt to pray. Faces were turned toward him, looked up to him to take sides; and instead he proceeded to pray. The act was moving, but more important it was ambiguous. The pope’s presence alone was to measure the extent of his commitment.

Political explanations for the pope’s behavior—the advice of local bishops, his personal experience in Poland, the dangers of encouraging violence—have been offered, but they fail to capture the drama of what was really happening in Santiago. It would be better to ask why the pope was there at all. The answer is simple: the Second Vatican Council. That event, decades distant, contains the clue to the pope’s predicament. After over 20 years, the Council’s most enduring effect has been to have removed the possibility of a complete separation between the Church and the modern world
(a separation represented perhaps most clearly by the late 19th-century papacy). For the Vatican, a political engagement with the world, a compromising commitment, is in full swing. It was such an engagement that was articulated in Santiago, where the ironies implicit in living the apostolic life in the modern world were bluntly revealed.

The Second Vatican Council was aware of the risks of opening a dialogue with the modern world, though the text of its proceedings breathes an optimism now quaintly anachronistic. In its mass of documents issues were grasped with unnerving directness. Pope John XXIII’s opening address to the Council was the first papal document addressed not merely to the faithful, but to “all men of good will,” He reached out even to the Communist world, by drawing a distinction between the systems of belief that it represented and the men and structures that enforced these beliefs, “Besides,” he continued, “who can deny that those movements, insofar as they conform to the dictates of right reason and are interpreters of the lawful aspirations of the human person, contain elements that are positive and deserving of approval?”

More significant, though less noticed, was the peace that the address made with liberalism. As Reinhold Niebuhr pointed out at the time. It rather easily laid to rest the long-standing confrontation between natural rights and natural law, by conflating the two. John XXIII both asserted the necessity For “freedom” and attempted to make it compatible with the moral strictures with which natural law constrained us. Catholics had a natural right to freedom, but they were not entitled to use that right for any ends they chose. Catholics were not “free” to accumulate wealth without
limit, nor to exploit, nor to commit adultery, nor indeed to commit any sin. Yet the admonishing rhetoric deliberately suggested that they were still “free” in a modern and politically charged sense of that word. It was, it is, an explosive mix.

These overtures made sense within the historicism of the documents, especially Pacem in Terris. It talked of a “new order” in which “the conviction that all men are equal by reason of their natural dignity has been generally accepted.” This was an order as inevitable as it was largely unsubstantiated in the text. It presented an opportunity for the Church to assist in the creation of a universal common good by which nations could address one another. A notion of progress had entered the spirit of the Church, bound up with particular political structures and ideas. And yet at the same time the Church was to maintain an independence from them. In subsequent years that independence proved rather paradoxical. . . .

. . . it is argument, not assertion, that is needed for the discussion inaugurated by the Vatican Council. That discussion can no longer be wished away. And that discussion will go nowhere fast unless it acknowledges the contradictory nature of Catholicism in the modern world. This Weigel, the happy synthesizer, does not do. By declaring natural law to be compatible with America, by making the solution so comprehensive and so simple, by articulating a theory that will banish all the complexities, Weigel misses something essential in the fate of the modern Church: its uncertainty. History has not provided the Church with a comfortably Hegelian purpose by which everything has been, or will be, resolved. It has instead presented faith with a moral challenge, with a choice that includes both good and evil. Far from showing the inevitable triumph of natural law, modernity has
seen the destruction of even the concepts that make natural law thinkable again. Weigel’s confidence misses the depth of this crisis, and its consequence for Christianity. Modernity leaves Christians with a challenge to gamble. We do not know whether alliance or attack is the safest option. But we do know that escape, or a cozy coincidence of philosophical and political opposites, is no longer possible.

Weigel’s book represents just such an escape from the dilemma that Hanson’s book describes. The escape is certainly coherent; but its coherence is its flaw, since it transforms the risk of faith into a safe bet. In so doing, it obscures the essence of the Christian calling: to act in radical doubt, in the knowledge that any action, even the best intended, can be a manifestation of evil. This is the risk for the Catholic Church in world politics. It is this uncertainty that explains the anguished expression on John Paul’s face as he knelt to pray in Santiago. And it goes some way, at least, toward explaining the contemporary challenge, even in America, of the cross to which he turned.