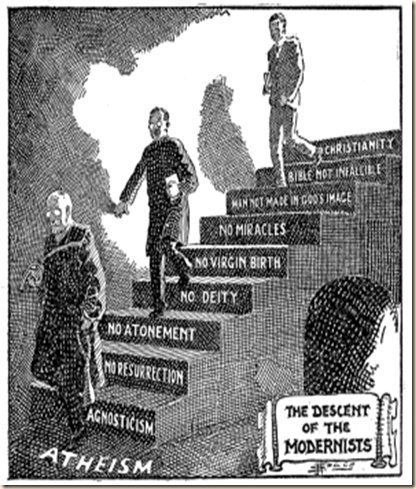 He is a reminder that belief is not normal (to fallen human beings).

The reason for that aside is Regis Martin’s article about the stupidity of atheists (trigger warning for the w-w deniers):

…people do not arrive at atheism as a result of hours heuristically spent perusing the philosophical journals. That is because it is not a matter of the intelligence that compels one to choose disbelief, but a movement of the will. One would have to be pretty witless if, on the strength of a syllogism, one were to conclude that there is no God. An atheist can no more eliminate God’s existence by his refusal to believe than a blind man can by his inability to see expel the sunlight. “The essence of God does indeed lie beyond the scope of intelligence,” Fr. Murray freely concedes, “but his existence does not.” And not to know at least that much, “is to nullify oneself as a man, a creature of intelligence.” Because belief in God is, very simply, the bedrock truth upon which everything else depends. To think otherwise, he argues, amounts to “a miserably flat denouement to the great intellectual drama in whose opening scene Plato appeared with the astonishing announcement that launched the high action of philosophy—his insight that there is an order of transcendent reality, higher than the order of human intelligence and the measure of it, to which access is available to the mind of man.”

In which case, we should never trust an atheist or unbeliever with any sort of responsibility (and we should live in a Christendom because only God-affirmers have the bedrock for truth).

But what if faith is not natural? What if philosophical inquiry and logical deduction still don’t make a man or woman believe? What if, get this, Paul was right?

28 And since they did not see fit to acknowledge God, God gave them up to a debased mind to do what ought not to be done. 29 They were filled with all manner of unrighteousness, evil, covetousness, malice. They are full of envy, murder, strife, deceit, maliciousness. They are gossips, 30 slanderers, haters of God, insolent, haughty, boastful, inventors of evil, disobedient to parents, 31 foolish, faithless, heartless, ruthless. 32 Though they know God’s righteous decree that those who practice such things deserve to die, they not only do them but give approval to those who practice them. (Romans 1)

Imagine that: Reformed Protestants take atheists more seriously than Roman Catholics because of the doctrine of total depravity. If you start with the reality that all people are lost in their trespasses and sins, that their minds are “darkened” as a result, you set your expectations of unbelievers accordingly. But if you look at faith as the bedrock of understanding the world (think w-w), and you need to trust your neighbors not to do irrational things, then you are going to attribute belief in God to them (and meanwhile deny total depravity).

Mencken matters because he’s proof that unbelievers are smart, and that the Holy Spirit is more powerful than reason in giving people faith in Jesus Christ as their savior.

10 thoughts on “Why Mencken Matters”