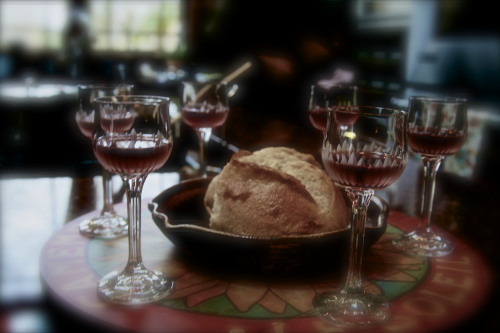 I’ve long thought and contended that Peter Leithart is clever. I also think he is too clever for his own good. Rather than identifying with a particular strand of Christianity (like the PCA, the RPCNA, New Light Calvinism, or even Moscowite-Baptist-Presbyterian hybrid) and trying to strengthen it, Leithart indicates that most expressions of Protestantism do not measure up. He recognizes some good in them, but not enough to come to their defense. He seems to want a new kind of Protestantism, but one that is very much in his own conception.

I thought this repeatedly while reading his series on paedocommunion. In his first post he utters a classic Leithartianism:

The question is not what the Reformed tradition has taught on this issue; I concede that very few Reformed theologians have advocated paedocommunion. Nor is the question about Jewish custom, which opponents of paedocommunion often cite. (Why should Christians care what the Talmud says?) The issue is what Scripture teaches, and if we find that our tradition is out of accord with Scripture, then we must simply obey God rather than men, even if they are our honored fathers in the faith.

The problem is, what Scripture teaches is different from a form of argument (inspired by John Frame) that because A is like B and B is like C and C is like D, A is the equivalent of D. In the case of paedocommunion, much of Leithart’s argument rests on Passover:

Though children’s inclusion at Passover is never as explicitly stated, there is a compelling—I would say, conclusive—case for paedo-Passover. Exodus 12:3–4 specifies the size of the lamb needed for the meal: “Speak to all the congregation of Israel, saying, “On the tenth of this month they are each one to take a lamb for themselves, according to their fathers’ households, a lamb for each household. Now if the household is too small for a lamb, then he and his neighbor nearest to his house are to take one according to the number of souls; according to each man’s eating, you are to compute for the lamb.”

This regulation makes it clear that the Passover lamb had to be at least big enough to feed a household, but what is a “household”? Throughout the Pentateuch, “house” includes children and servants. Noah’s “house” obviously included his sons and daughters-in-law (Genesis 7:1), and Abram circumcised his servants as males in his “house” (Gen. 17:23, 27). The very first verse of Exodus tells us that Jacob’s sons came to Egypt, each with his “house” (1:1). Nowhere in the Bible does a “household” exclude children. If the lamb was to be large enough for a household, it was to be large enough to give the children of the house a portion. If younger members of the household were not going to eat, why was the size of the lamb large enough to feed them? To taunt them? . . .

Israelite children shared in every meal in which their parents participated. Because the church is the new Israel, the entry requirements to the church’s Passover are the same as they were for Israel. Discontinuity with regard to admission to the table, like discontinuity between the subjects of circumcision and baptism, undermines the identification of the church and Israel. What are we saying about the church when we exclude children from the table? We are saying that we are not Israel.

Leithart fails to notice a major form discontinuity between the Passover meal and the Lord’s Supper. The former happened at home. The latter is part of worship on the Lord’s Day. In fact, both circumcision and the Passover (as I understand) were not observed in the Temple or later the synagogue. They happened at home within the family. In contrast, baptism and the Lord’s Supper happen at church (unless you dunk and don’t have a baptistery).

What! Do you not have houses to eat and drink in? Or do you despise the church of God and humiliate those who have nothing? What shall I say to you? Shall I commend you in this? No, I will not. (1 Cor 11:22)

Clever is like convincing except that it isn’t convincing.

14 thoughts on “Eating at Home”