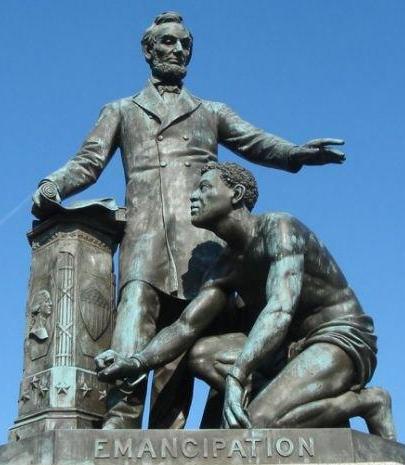 The overwhelming case against Confederate Monuments is that either those memorialized or their patrons stood for an evil cause — slavery.

Frederick Douglass pointed out that Abraham Lincoln’s motives in the war were not pure, and that those who came to celebrate the 16th POTUS at the unveiling of the Freedmen’s Memorial Monument, also had mixed motives in the war:

It must be admitted, truth compels me to admit, even here in the presence of the monument we have erected to his memory, Abraham Lincoln was not, in the fullest sense of the word, either our man or our model. In his interests, in his associations, in his habits of thought, and in his prejudices, he was a white man

He was preeminently the white man’s President, entirely devoted to the welfare of white men. He was ready and willing at any time during the first years of his administration to deny, postpone, and sacrifice the rights of humanity in the colored people to promote the welfare of the white people of this country. In all his education and feeling he was an American of the Americans. He came into the Presidential chair upon one principle alone, namely, opposition to the extension of slavery.

His arguments in furtherance of this policy had their motive and mainspring in his patriotic devotion to the interests of his own race. To protect, defend, and perpetuate slavery in the states where it existed Abraham Lincoln was not less ready than any other President to draw the sword of the nation. He was ready to execute all the supposed guarantees of the United States Constitution in favor of the slave system anywhere inside the slave states. He was willing to pursue, recapture, and send back the fugitive slave to his master, and to suppress a slave rising for liberty, though his guilty master were already in arms against the Government. The race to which we belong were not the special objects of his consideration.

Knowing this, I concede to you, my white fellow-citizens, a preeminence in this worship at once full and supreme. First, midst, and last, you and yours were the objects of his deepest affection and his most earnest solicitude. You are the children of Abraham Lincoln. We are at best only his stepchildren; children by adoption, children by forces of circumstances and necessity. To you it especially belongs to sound his praises, to preserve and perpetuate his memory, to multiply his statues, to hang his pictures high upon your walls, and commend his example, for to you he was a great and glorious friend and benefactor.

Having said all that, Douglass was willing to honor Lincoln:

Instead of supplanting you at his altar, we would exhort you to build high his monuments; let them be of the most costly material, of the most cunning workmanship; let their forms be symmetrical, beautiful, and perfect; let their bases be upon solid rocks, and their summits lean against the unchanging blue, overhanging sky, and let them endure forever! But while in the abundance of your wealth, and in the fullness of your just and patriotic devotion, you do all this, we entreat you to despise not the humble offering we this day unveil to view; for while Abraham Lincoln saved for you a country, he delivered us from a bondage, according to Jefferson, one hour of which was worse than ages of the oppression your fathers rose in rebellion to oppose.

5 thoughts on “Even Patriotic Good Works May Be Tainted”