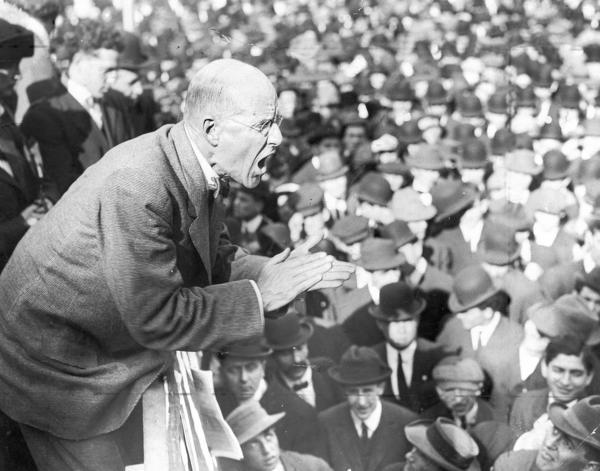 People who self-identify as Christian scholars have issued a statement that condemns racism:

Racism should be denounced by religious and civic leaders in no uncertain terms. Equivocal talk about racist groups gives those groups sanction, something no politician or pastor should ever do.

The Christian basis for such denunciation is that all humans are created in the image of God. So far, so uncomplicated.

The statement also includes an affirmation of civil liberty:

Even as we condemn racism, we recognize that the First Amendment legally protects even very offensive speech.

The statement could include freedom of assembly, and freedom to publish. But these Christians see that our laws protect speech even when it is offensive.

Now imagine if the abolitionists had made similar assertions about slavery:

Even as we condemn slavery, we recognize that the First-Amendment legally protects slavery advocates to express their ideas.

I don’t think that kind of toleration was in William Lloyd Garrison’s playbook.

I am aware, that many object to the severity of my language; but is there not cause for severity? I will be as harsh as truth, and as uncompromising as justice. On this subject, I do not wish to think, or speak, or write, with moderation. No! no! Tell a man whose house is on fire, to give a moderate alarm; tell him to moderately rescue his wife from the hands of the ravisher; tell the mother to gradually extricate her babe from the fire into which it has fallen; —but urge me not to use moderation in a cause like the present. I am in earnest—I will not equivocate—I will not excuse—I will not retreat a single inch—AND I WILL BE HEARD. The apathy of the people is enough to make every statue leap from its pedestal, and to hasten the resurrection of the dead.

And so, the problem that proponents of certain moral positions in public face is that in a free society, we make room for sinners.

Even as we condemn adultery, we recognize that we don’t want police going into private homes to see what people are doing.

Even as we condemn the desecration of the Lord’s Day, we recognize that those who try to observe the Fourth Commandment should not receive special protections from law enforcement officials for their beliefs.

Even as we condemn Communism, we recognize that the freedom of association allows the Communist Party USA to enjoy the protections of tax laws and civil and corporate codes.

In other words, a liberal society will not allow government to root out sin. It even protects its practice.

That is an especially difficult aspect that this statement does not address. The authors acknowledge that racism has taken many forms in U.S. history:

Slavery was formally abolished in 1865, but racism was not. Indeed, it was often institutionalized and in some ways heightened over time through Jim Crow legislation, de facto segregation, structural inequalities, and pervasively racist attitudes.

American law and policy have addressed some of these instances of racism — Jim Crow, structural inequalities, voting rights. But can legislation do anything about racist attitudes or the efforts of those who hold them to meet and publish?

Probably. But then you may no longer have a free society.

In which case, what does speaking out do?

Even without liberalism, will always have sin with us. With it, we have different interpretations of sin and so vice receives protection.

32 thoughts on “How Liberalism Abets Sin”