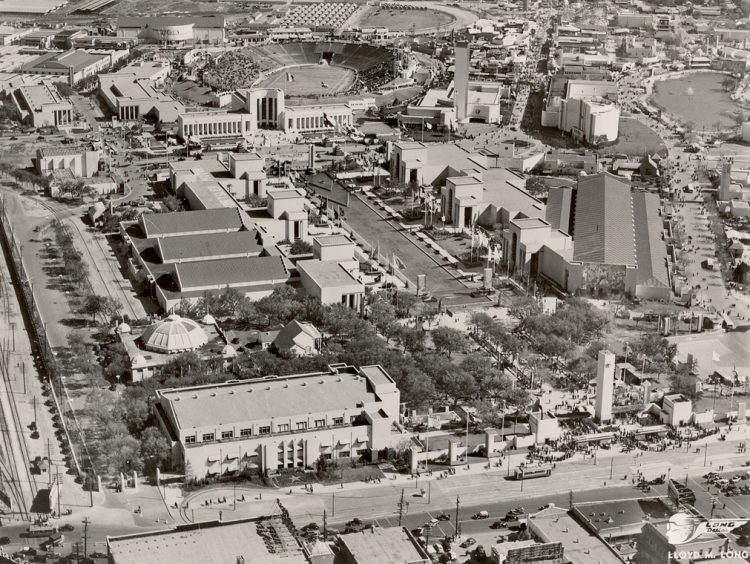 But Rain Bomb 2019 meant we could only circle First Park on its side streets. Here’s why it is intriguing:

The one constant about World’s Fairs and Expositions—from Chicago’s White City to the several Expositions Universelles in Paris to the New York World’s Fair of 1939—is that you cannot in any meaningful sense go to see them. It’s not merely that the midways are empty, Buffalo Bill dead, the dancing girls clothed, and “Forbidden Tibet” forbidden. The physical imprint of almost every single exposition of the golden age from the 1870s to the 1930s has been almost completely effaced, with remnants typically constituting one or two relics and some landscaping.

There are very few exceptions. But your best bet for immersion today is in Dallas’s Fair Park, a stunning time capsule from 1936 with 26 buildings remaining from the Texas Centennial Exhibition. Fair Park has been and remains the host of the Texas State Fair since 1886, so a spectacle persists every fall for three weeks. Many decades later, the difficult problem is what to do with these stellar grounds the other 11 months of the year. And the question is how Dallas can enliven this huge urban monument today—even as there is no question that the 1936 legacy of Texas should be both celebrated and preserved.

Though Fair Park’s landmark exhibition was not technically a “World” exposition, it drew on a very considerable range of national and international talent, and lived up to Texas’s reputation for gigantism in all of the best ways. As Jim Parsons and David Bush write in their book, Fair Park Deco: “In 1936, most of the United States knew little about Texas. If Americans thought of the state at all, they probably imagined it as a vast frontier filled with cowboys and oil wells. Centennial publicists, armed with a $500,000 allocation from Austin, were perfectly happy to use those misconceptions to their advantage, spinning them into decidedly sentimental symbols of the Lone Star State.”

But what if fairs were meant to exist only during the event itself (sort of like General Assembly)?

A majority of the great fairs of yesteryear were intrinsically evanescent, built to be destroyed, with many of the most seemingly opulent sharing a material foundation of staff, a compound containing some cement, but much larger amounts of plaster of Paris, often strengthened by fibers or literal sackcloth. It wouldn’t last, and was torn down before it would decay in Paris in 1878 and 1889, Chicago in 1893, Buffalo in 1901, St. Louis in 1904, and elsewhere. This was relative material luxury; later fairs such as Chicago’s Century of Progress were built largely out of plywood—possibly not much progress!

Fair Park was an exception, building structures out of more durable materials. Some were subsequently demolished and many decayed greatly. Much of the art adorning these buildings was painted over. Despite a number of much larger threats over time, the considerable majority survived and restoration efforts beginning in the early 1980s have restored many of their original 1936 features.

Part of the trouble is that, for all of the varied urban sobriquets applied to large expositions and fairs, from Chicago’s White City to Buffalo’s Rainbow City (a common nickname for The Pan-American Exposition of 1901) and onwards, they’ve more often been a vision of fantasy urbanism than the real thing, even beyond their temporary construction. Sometimes their sites are highly central, such as Paris’s Champ de Mars, but more often they are located in fairgrounds or used as schemes to improve or create parkland on the urban periphery. Flushing Meadows Corona Park in Queens is not exactly well connected to its surroundings. Balboa Park in San Diego, host of the California-Pacific International Exhibition (and the most substantial surviving complex in the U.S. beyond Fair Park), consisted of a simulacrum of a dense urban core in the middle of a park.

Even better connected events, such as the World’s Columbian Exhibition, share a highly anti-urban feature: ticket gates. Walkable and visually appealing urban landscapes behind gates, poorly connected to any street grid, is the story of, well, Disneyland: it’s no surprise that Walt’s father, Elias Disney, worked as a carpenter on the World’s Columbian Exposition. Walt visited others and constructed attractions for the 1964 New York World’s Fair.

Is this part of a by-gone era of urban life and recreation, or will thee Holy Urbanists have a plan to be in the city, for the city?

Other examples of this type of built environment are relatively rare. Balboa Park in San Diego has a more robust set of tenant institutions, including the city’s main art museum, natural history museum, and science center (with a total of 16 museums) but struggles with some similar issues. Exposition Park in Los Angeles, which is a somewhat smaller version of the same with stronger resident institutions, houses Los Angeles’s major league soccer team, their principal Natural History Museum and Science Center, the Los Angeles Memorial Coliseum, and will soon be host to George Lucas’s Museum of Narrative Art.

More recent exposition grounds suffer from fewer preservation burdens but similar difficulties just staying tenanted and busy. Hemisfair Park in San Antonio has a number of unused pavilions and has built a hotel and is adding apartments and commercial space. At the site of the 1962 World’s Fair of Space Needle fame, the Seattle Center grounds are relatively vibrant, but some spaces sit empty and unused.

Many of these spaces are of a scale that echoes Jane Jacobs’s criticism of another megaproject, Lincoln Center, as an unnatural isolation of culture from ordinary activity of the city—though the scale of these fairgrounds can make Lincoln Center look positively modest. In any case, when cultural facilities are spread across the urban fabric, they are obviously more easily integrated with their surroundings or repurposed. There is no arguing with a fundamentally unique treasure such as Fair Park, however, and we can only hope that it devises a formula for success.

(By the way, The American Conservative excels in its reporting on new urbanism, architecture, and localism.)