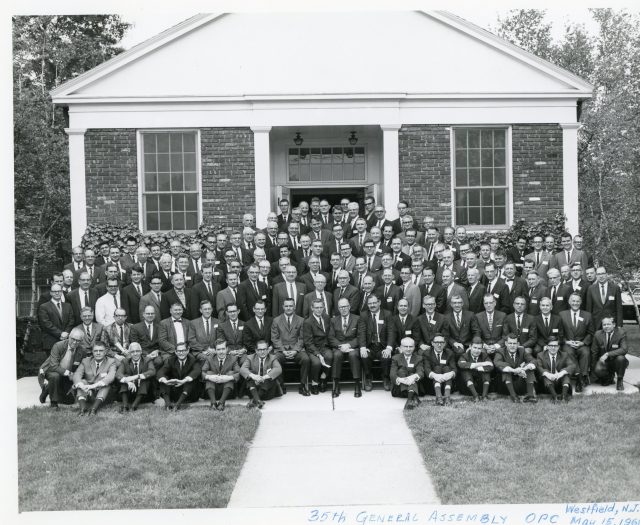 Chris Gordon’s piece on how the CRC lost its Reformed bearings has wisdom not only for noticing similarities between the CRC and New Calvinists but also contains a warning about developments in the PCA:

NAPARC churches should not forget their older brother, the CRC. Unless these concerns are taken seriously, I foresee the PCA and other Reformed denominations following this trajectory heading for fights, splits, and empty pews. They will be on a fast track to becoming just another mainline liberal denomination scratching its head at General Assembly meetings as they desperately try to find answers. I pray that my dear brothers and sisters in NAPARC will hear this humble plea from a brother in Christ who learned how true it is that those who forget their (church) history, are most certainly doomed to repeat it.

One difference between the CRC and PCA is the former’s ethnic outsider self-identity compared to the latter’s effort to become the Presbyterian insider. In other words, the CRC wanted to leave the ghetto and enter the mainstream; one way to do that was to embrace some forms of evangelicalism. For a time the CRC even considered merging with the OPC (as explained in Between the Times — self-promotion alert!):

Decreasing familiarity with the OPC was one of the factors to which Henry Zwaanstra pointed in this study of the CRC’s ecumenical relations. In fact, his narrative highlights developments in 1967 as decisive for sinking the project. The previous year, according to Zwaanstra, the OPC’s committee was requesting “their general assembly to declare that the joint committee should work toward the definite goal of organic union.” But the following year, the OPC’s Assembly “retired its representatives from the joint committee and appointed new members.” The reason for the new appointments, according to Zwaanstra, was “mandate to investigate trends toward Liberalism in the CRC.” . . .

Indeed, the overwhelming factor that prompted the OPC to worry about liberal theological trends in the CRC was a re-ignition of anti-liberal polemics during the mid-1960s over the PCUSA’s adoption of The Confession of 1967. During the 1960s leadership within the OPC spent considerable time disputing the mainline Presbyterian Church’s revision of its confessional standards and faulting the denomination for embracing a Barthian doctrine of the Word of God. This view, exhibited in the Confession of 1967, distinguished in effect between the sort of encounter with divine revelation that came through Scripture rather than regarding Scripture itself, its words, paragraphs, and books, as the Word of God. One Orthodox Presbyterian who was particularly vocal in defending the Reformed doctrine of Scripture and in criticizing was E. J. Young, newly appointed to the OPC’s committee to confer with the CRC. The Old Testament professor was by no means insensitive to the assistance the CRC had given to the OPC since Young had served with the likes of Van Til, Stonehouse, and Kuiper, and as a renowned scholar had trafficked in Christian Reformed circles at conferences and lectures. And yet, Young was adamant in his diagnosis of Barthian developments in the PCUSA and was likely sensitive to similar trends in the CRC even if evident in much less noticeable ways.

Thanks to arguments by Young and Van Til, for instance, by the second half of the 1960s the OPC’s sensitivity to defective expressions of the doctrine of Scripture was at an all time high and undoubtedly many pastors and teachers detected echoes of a Barthian view in Dutch Calvinist circles. Whether members of the CRC themselves actually resembled Barth or were simply guilty of not condemning Barth’s influence upon the GKN is a debatable point. Either way, the controverted status of Barthianism for Orthodox Presbyterians was certainly a factor in the growing distance between the OPC and the CRC. (161-62)

The OPC did not have a front-row seat to changes in the CRC, but it had more familiarity than most Presbyterian churches. In which case, reading about OPC-CRC relations between 1956 and 1970 is a supplement to Gordon’s post (read: buy the book).

3 thoughts on “How the OPC Avoided becoming the CRC”