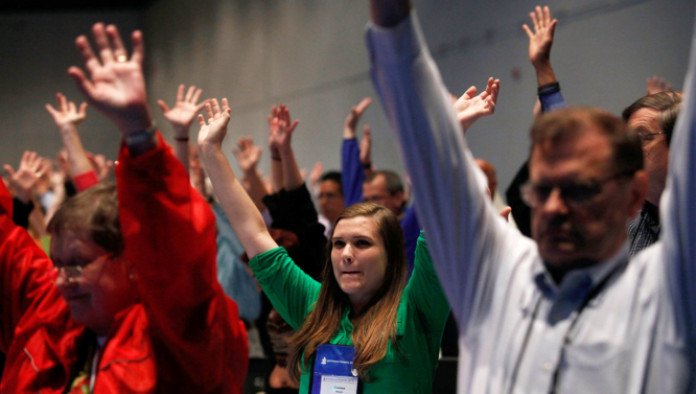 Chris Gerhz is a good historian and generally thoughtful about a number of matters (even when you disagree), but his piece about the virtues of mainline Protestantism is an indication of how thin the ties are within the bond of evangelical Protestantism. In the post, he is frank about the mainline’s numerical decline and mentions a few reasons for it. But Gehrz also mentions several features of the mainline that he appreciates and would hate to go away. First up, women’s ordination:

In an inscription on the balcony in our sanctuary, the Apostle Paul reminds us that it is by “the power of the Holy Spirit” that we “may abound in hope” (Rom 15:13). Truly, I have hope for the renewal of the ELCA, the mainline, and all the church, because I trust that God’s Spirit continues to move in our midst: comforting, counseling, and gifting us to accomplish more than we can imagine.

Whenever I need to be reminded of that truth, I turn my head to the right of the choir loft, where I see the two women who serve as our senior and associate pastors preaching the Word and administering the sacraments. Then I think of the women on our staff who direct the church’s excellent children and youth ministries. And while I don’t put a lot of credence in church hierarchies, I may even recall that women currently serve as the bishop of our local synod and as the denomination’s presiding bishop.

In a time when most (non-Pentecostal) evangelical denominations deny such roles to women or fail to back up egalitarian words with regular calls to pastoral ministry and leadership, it’s the mainline that best embodies the Pentecost message that God has poured out his spirit on all humanity, such that daughters and sons alike will speak for him.

Say what you will about the significance of women’s ordination — some could conceivably liken it to Sabbath-Day desecration, which is hardly an offense worthy of ecclesiastical discipline in the Presbyterian world — but what sort of support might a fellow like Gehrz render to fellow Presbyterians if he were in a common endeavor with them? Chances are if a vote came up about recognizing a female pastor or an organization’s ties to a communion that ordained women, Gehrz would vote with mainline Protestants against those Presbyterian communions that refuse office to women. That’s not inherently bad. But it makes difficult the thought that an Orthodox Presbyterian and an evangelical Pietist-turned-mainline-Lutheran could meaningfully cooperate in so-called Christian organizations.

Here I don’t so much mean the institutional ecumenism of the National and World Councils of Churches as the lived faith of congregations like ours, where we’re regularly reminded both of our Lutheran distinctiveness and our participation in the unity of the church catholic….

“Go in peace,” we’re told at the end of worship, “and serve the Lord.” That’s a charge we can only fulfill together, with Christians who might belong and believe differently than us. During Sunday’s education hour, we learned about our church’s partnership with Dorothy Day Place, which continues that Catholic writer’s commitment to living in solidarity with the poor. The week before, children of all ages had assembled materials for Bridging, a local nonprofit that helps Minnesotans transition out of homelessness; its Catholic founder had died the day before.

There goes the spirituality of the church (or the idea that the church provides services — chiefly spiritual and eternal — that non-government agencies or government welfare can). When the idea of Christian unity comes from race, class, and gender, what’s a Presbyterian to do about the Shorter Catechism or the regulative principle of worship?

Finally, Gehrz thinks the mainline has contributed well to congregational singing and liturgical music (it is hard to disagree, especially if evangelicalism is known primarily for Praise & Worship worship music):

In Paul’s much-debated passage on the mutual submission that marks a united church, he also describes being “filled with the Spirit” in these terms: “you sing psalms and hymns and spiritual songs among yourselves, singing and making melody to the Lord in your hearts, giving thanks to God the Father at all times and for everything in the name of our Lord Jesus Christ” (Eph 5:19).

Of course, there are many ways of living this out in practice. We all have our own preferences. You won’t be surprised that an evangelical who laments the removal of hymnals is no fan of worship that takes its cue from megachurches, where the congregation is too often reduced to a passive audience standing silent as professional performers sing words that are too shallow to the accompaniment of tunes that are too monotonous. …

Of course, “traditional” worship has its own problems. … But at its vibrant, creative best, such worship embodies Pelikan’s definition of tradition (“the living faith of the dead”). For example, my heart swells as the centuries-old words of Nicolai’s Epiphany chorale again “teach us / God’s own love through you has reached us.” And it’s worth pointing out that five of the eight texts our congregation or choir sang in that single hour of worship were written by authors born in the 20th century. This, too, is living tradition: Christian composers and writers continuing to adapt old musical forms to accompany still older words (mostly from Scripture itself)… and Christian laypeople continuing to sing them, actively participating in worship. (Many of them even singing in four-part harmony, another way we may learn Christian unity.)

That this happens is not the result of mere inertia. It has taken the conscious, ongoing investment of mainline churches in publishing houses that encourage musical creativity and in colleges that provide musical training for professionals and amateurs alike.

At this point, Gerhz might appreciate the OPC and URC’s cooperation in producing a Psalter-Hymnal, an expression of Reformed Protestantism’s tradition of congregational song. What is unclear is how interest in the past when it comes to worship fits with the relative recentness of ideas about ordaining women and the social gospel. It actually looks like the mainline tradition, as it appeals to some evangelicals, is a relatively arbitrary collection of ideals and convictions — good taste when it comes to music, overturning hierarchies when it comes to gender and class.

To his credit, Gehrz concedes that mainline Protestantism can go wrong:

Beautiful music can become the end of worship, rather than one of its means. Practiced for its own sake, ecumenism easily turns bureaucratic or latitudinarian. And the conviction that the Spirit is bringing renewal can tempt us to exchange dead orthodoxy for living heterodoxy.

But I don’t suspect he will want any help from confessional Presbyterians in spotting if and when the mainline veers from orthodox norms.

Which makes me wonder again why conservative Presbyterians ever thought they would get much in return for joining forces with so-called evangelicals. Heck, it looks like evangelicals — think Charles Erdman — resonate more with liberal Protestantism than with confessional Protestantism. It is another variety of third-way Christianity — neither modernist nor historic. But always with a nod to the Holy Spirit. Just not too much like those crazy Pentecostals.

2 thoughts on “Why Presbyterians Are Ambivalent about Evangelicals”